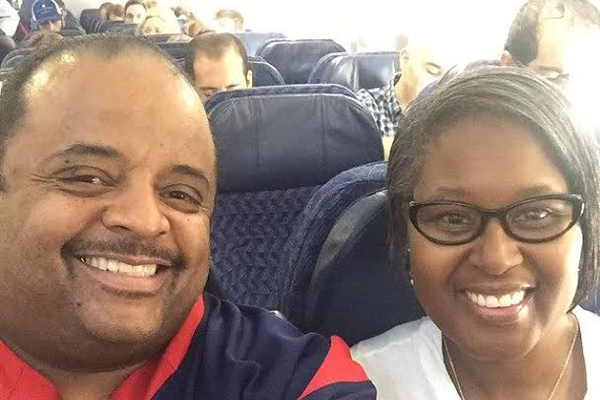 “Me and @Jhoodmartin headed to St. Kitts rockin our @houstontexans gear. Got my @jjwatt MVP jersey!#BullsOnParade,” Martin posted with a photo of himself and wife in the plane on his FaceBook page Sunday.

Hours after, the posting has attracted nearly 3,000 likes and 24 shares with nearly 100 comments.

“I love St. Kitts. Hope you get to the Marriot there. Great restaurants, spa, etc. Have fun,” posted Sharon Scott Brooking.

Maria Cole told Roland that St. Kitts is a beautiful island and that she has ancestry there, while Shermel Brown, Cathy Kirnon, and Amelia Meele Chiverton suggested he visits Nevis.

” I hope you meet with Randall Robinson from TransAfrica because he lives in St. Kitts, “posted Laveda Glover.

He was also given suggestions where to eat.”Make sure you eat at Kathy’s. The food is so good and so fresh,” wrote Joy Whren.

Angie Davis suggested Roland “stay off social media while on vacation. Give his fingers a rest.”

While the Communications Unit in the Office of the Prime Minister (CUOPM) has confirmed that Roland Martin and his wife are house guests of a local family, chances are he will be attending the Fourteenth Annual Prime Minister’s New Year’s Gala hosted by The Right Hon. Dr. Denzil L. Douglas at the Grand Ballroom of the St. Kitts Marriott Resort and Royal Beach Casino on Saturday 3rd January 2015.

Martin is a syndicated columnist with Creators Syndicate and author. He is a commentator for TV One and the host of News One Now, a one-hour weekday morning news show on the network.

He was also a CNN contributor, appearing on a variety of shows, including The Situation Room, Anderson Cooper’s AC360, and many others. In October 2008, he joined the Tom Joyner Morning Show as senior analyst.

Books authored by Martin include Speak, Brother! A Black Man’s View of America, Listening to the Spirit Within: 50 Perspectives on Faith and The First: President Barack Obama’s Road to the White House as originally reported by Roland S. Martin.

Martin was born in Houston, Texas. He graduated with a B.S. in journalism from Texas A&M University and a master’s degree in Christian communications from Louisiana Baptist University.

During the 1990s, Martin was a contributor on the BET Sunday morning news programme Lead Story. He is the former executive editor of the Chicago Defender. Martin hosts a morning radio talk show on WVON in Chicago, and was with CNN as a contributor from 2007-2013.He guest-hosted Campbell Brown: No Bias, No Bull while Brown was on maternity leave in April and May 2009.

It was announced on July 9, 2013, that Martin would be the host of TV One’s first live one-hour, weekday morning news program titled News One Now. The programme premiered on November 4, 2013.