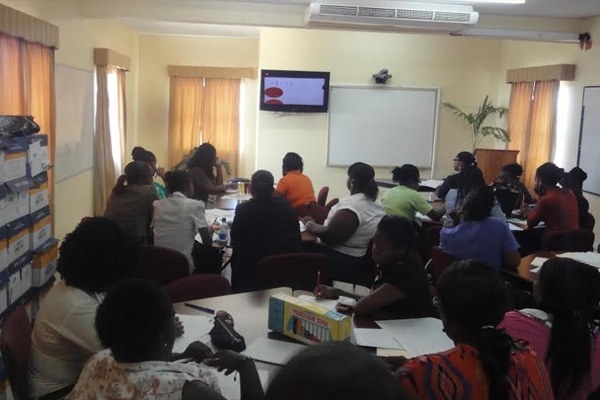 In mathematics, a manipulative is an object designed to help a student to recognize a mathematical concept by altering it, in this case fractions. Using manipulatives will allow the students to connect mathematical ideas and symbols to physical objects, thus promoting better understanding. Children would be able to recognize and name fractional amounts, demonstrate equivalent fractions using common items as concrete examples and understand the definition of a fraction.

The workshop was aimed at broadening teacher’s ideas about how to get children more involved in fraction lessons as well as share what they have learnt to others.

Math Coordinator Linda Moving stated that at the end of the workshop teachers should be better able to implement this strategy in their classrooms.

“Whatever is learnt here is expected to be imparted to your schools and to be shared with other teachers along the way and with the hopes that we can improve the children’s ability in factions.”

One of the 30 teachers present at the workshop, Benjamin Thomas, stated that having this new learning tool is beneficial to both teachers and students.

“It’s good because it gives us as teachers different avenue strategies, different ways we can use manipulatives to teach factions which is a very difficult concept to grasp.”

Another math teacher Jacqueline Joseph stated that teachers do not normally use this technique all the time but it is something that all math teachers should adopt.

“We teach fractions without using manipulatives most of the time and I’ve realised that it is important to teach children that a half is relative to its region. Meaning that a half of an object is dependent on the size of the object,” she stated.

“For example a half of an apple would be different from a half of a watermelon. Using manipulatives helps them to recognize that the size of a half can change, the size of fractions on a whole can change. I would be better able to help my children understand fractions better and I hope to implement a lot of these strategies in my class.”

This is the third workshop being held by ODU and it will be holding others throughout 2015.