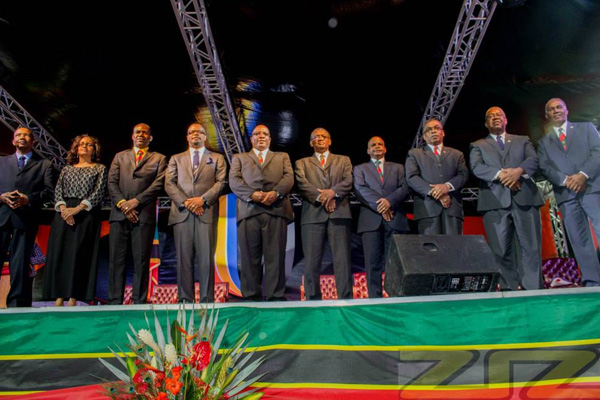 (ZIZ News) — The full Federal Cabinet of ministers was revealed to the Nation and thousands of persons abroad during Sunday’s swearing-in ceremony at the Warner Park Cricket Stadium.

The Hon. Dr. Timothy Harris will, for the next five years, serve as Prime Minister of St. Kitts and Nevis and Minister of Finance, Sustainable Development, National Security, People Empowerment and Constituency Empowerment.

The Hon. Shawn Richards is the new Deputy Prime Minister. He will also serve as Minister of Education, Youth, Sport, and Culture.

Nevis’ Premier, the Hon. Vance Amory, has been appointed as Senior Minister and Minister of Nevis Affairs, Labour, Social Security and Ecclesiastical Affairs. His colleague, the Hon. Mark Brantley, is the Senior Diplomat and Minister of Foreign Affairs and Aviation.

The Hon. Vincent Byron is the Attorney General and Minister of Justice, Legal Affairs and Communications.