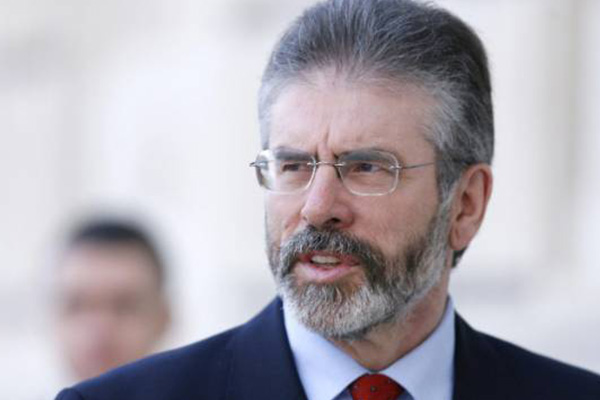 Belfast, Northern Ireland (CNN) — Gerry Adams’ arrest in connection with the 1972 abduction and killing of a mother of 10 by the Irish Republican Army is being praised by the family of the victim.

“The McConville family is glad to see police are taking our mother’s murder seriously and are doing all they can to bring the people that murdered her to justice,” said Michael McConville, the son of Jean McConville.

“An awful lot of people in the north and south of Ireland are glad to see Gerry Adams being arrested for this.”

In a statement released shortly before the Sinn Fein leader surrendered himself for questioning, Adams, 65, vehemently denied any involvement in the killing of Jean McConville.

The Police Service of Northern Ireland announced Wednesday the arrest of a 65-year-old man whom it declined to identify but described as a suspect in the McConville case. He remained in custody Thursday, the force said.

Adams has long denied having any role in the death of McConville, a widowed mother of 10 who was reportedly killed by the IRA because the group believed she was a spy for the British army.

“I believe that the killing of Jean McConville and the secret burial of her body was wrong and a grievous injustice,” Adams said in the statement posted on his party website. “Malicious allegations have been made against me. I reject these.”

The questioning of Adams was not unexpected. Adams said he told authorities last month that he was willing to meet with investigators.

“While I have never disassociated myself from the IRA and I never will, I am innocent in the abduction, killing or burial of Mrs. McConville,” Adams said.

Northern Ireland is part of the United Kingdom, and Protestant loyalists wanted to keep it that way. Catholics were fighting to force the British out and reunite the north with the rest of Ireland.

Known as the Troubles, the conflict lasted 30 years, ending in 1998 with the Good Friday Agreement that brokered peace. The agreement provided a political framework for power-sharing among the parties.

The IRA admitted in 1999 to killing a number of people who have become known as “The Disappeared” — those who vanished during the Troubles.

Among the victims was McConville, whose remains were found partially buried on a beach in County Louth in 2003. She died of a single gunshot wound to the back of the head.

“They came about tea time and they dragged her out of the bathroom and dragged her out,” said McKendry, who was a teenager at the time. “…All I ever wanted was to know the reason why they killed my mother.”

The investigation into McConville’s killing was revived by authorities after the release of interviews given by members of the IRA, who implicated Adams.

The recordings were made by Boston Collage as part of the Belfast Project, which is a collection of interviews conducted with former Northern Irish paramilitary fighters. They provide an oral history of the decades of fighting.

Participants in the project believed their recorded interviews would be kept secret until their deaths.