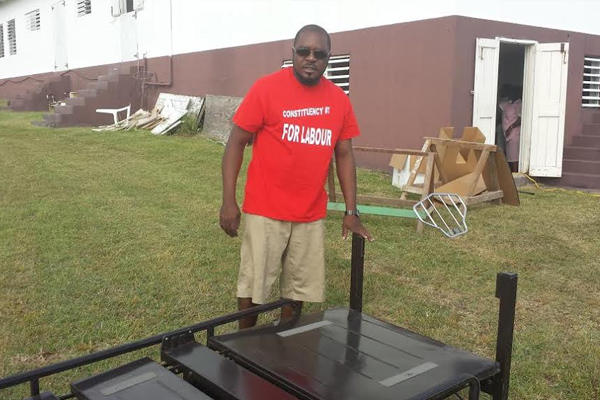 ZIZ News — While much of the nation enjoyed the recent public holiday on Monday quietly or participated in one of the many activities staged, a team, lead by Dr. Vance Gilbert spent their Whit holiday at the Mary Charles Hospital restoring out of service beds.

Gilbert, who is an established medical doctor, explained how he came to be part of this much needed restoration activity.

“We started this political campaign on a theme of dedicated service to community. In our week of activities in March we visited the Mary Charles Hospital in Molyneux where we gave a donation to the hospital of some stationery items and utensils,” he said.

“In that visit we recognized that there were some challenges as it relates to some of the infrastructure in the hospital, some of the beds, etc that were in a very poor condition and we determined right then and there in conversation with the staff at Mary Charles Hospital that we were going to make a contribution to the hospital by renovating some of the beds that were there. And so on Whit Monday we were able to use our vacation time wisely,” he added.

The team who visited the hospital were able to clean, sand, and paint a number of beds which had been packed away in storage.

The increased number of beds will ultimately mean that the Mary Charles Hospital will have the capacity to serve more people in need of medical assistance.

Gilbert also extended great appreciation to those who assisted him in the restoration work.

Additionally, he thanked the community for their continued support of the Mary Charles Hospital. He also challenged the nation to become more involved in community activities.