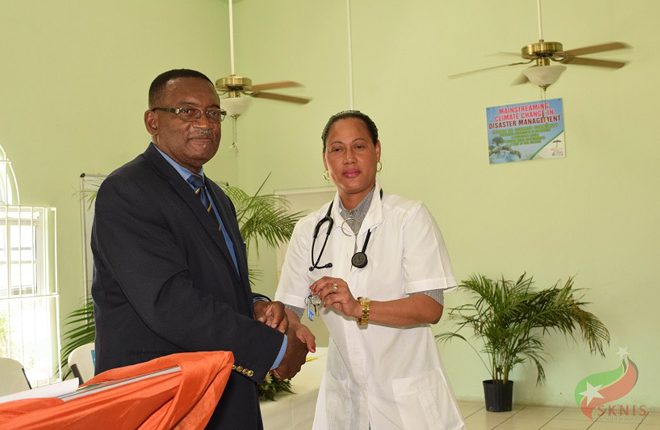 (SKNIS): The Government of National Unity believes that health care must be accessible to all and that people shouldn’t have to travel too far for their primary healthcare needs, hence the government is bringing health care to the heart of communities.

Shortly after the recommissioning of the Dental Clinic and EMT/Ambulance services at the Mary Charles Hospital in Molineux on July 31, the delegation of ministers and healthcare stakeholders proceeded to Conaree to mark the opening of a two-day a week doctor’s office housed in the Community Centre, which will be served by Dr. Maria Warner.

At a brief opening ceremony to commemorate this new addition to the Conaree community, Minister of Health, the Honourable Eugene Hamilton, said that after years of waiting, the residents of Conaree can now be guaranteed access to a doctor two days a week.

“Today I repeat how proud I am that we have now given life to that dream of a doctor’s office in this Conaree district. Today’s launching affords me and the people in Conaree more practical access to services being offered more closely to where people live,” he said.

He said that the government is mindful that the health profile of the country is one that trends towards severe and non-communicable diseases. He added that as a result, the Ministry of Health is engaged in a holistic approach to avoid bankruptcy of those in need trying to cover the cost that comes with illnesses.

“We in the ministry have determined on this holistic approach to deliver health care—a focus on health promotion, a focus on chronic diseases and universal health care coverage,” he said.

Minister Hamilton also expressed that the promotion of health is of great importance in the Federation and therefore it is the ministry’s ethical responsibility to educate and sensitize the public on healthy living. He said that it is paramount that the focus be shifted to prevention rather than the cost of healthcare going to curative measures. He thanked Minister Phipps for her work in making the opening of the doctor’s office a reality.

“I want to thank our Minister Wendy Phipps who has for the last few months worked tirelessly to bring this facility to the point where it is to be able to house the doctor’s office so that the services I speak about, including our health promotion services can be delivered to the people of Conaree,” Minister Hamilton said.