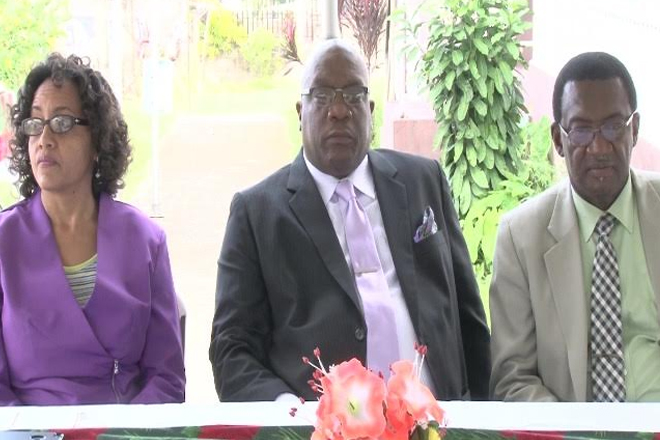 (ZIZ News) – The Mary Charles Hospital was among the Christmas stops of the country’s Prime Minister who, on Wednesday, accompanied his colleagues Hon. Eugene Hamilton, who is the Minister of Health; and Senator Hon. Wendy Phipps to the annual Christmas programme.

Dr. Harris, while addressing the staff, spoke of the planned renovation there, noting that the project will see “The re-fastening and strengthening of the roofs.”

“We have had significant leaking problems at the Mary Charles. Once these work of renovation have been completed, we should now be in a better position, correcting the leaking issues. The building will be repainted both interior and exterior facilities. You will have new upholstered furniture. The television and computer and peripherals will all be replaced and you will get the latest and most modern,” the Prime Minister added.

He said that work would be done to the kitchen and to improve the plumbing at the hospital.

ZIZ News understands that during the renovation, Accident and Emergency services would be carried out in the old dental section with more serious cases being referred to the JNF General Hospital.

“We are expecting that the Permanent Secretary will work diligently on this project so that in a short period of time, we expect the work to start,” Dr. Harris said, adding, “as far as I’ve been advised, there are no reasons why the work should not commence early in January so that the temporary displacement which now happens will be corrected.”

Other high ranking health officials at that ceremony were Permanent Secretary Andrew Skerritt, Advisor Eugene Condor and Henrietta Solomon who is the Operations Manager for Institution Health Based Services.