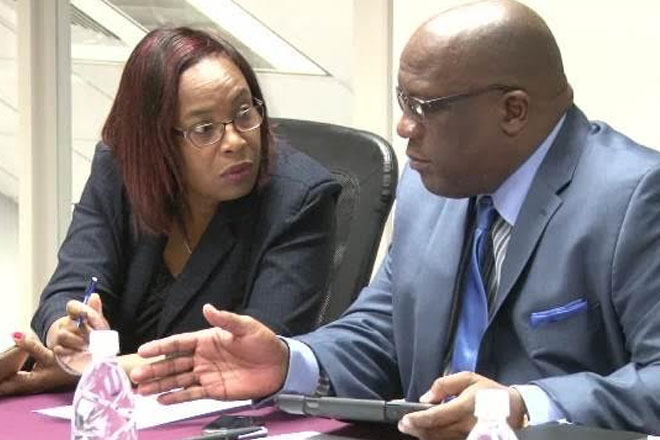 (ZIZ News) – Various ministries and departments within the Federal Government are already making plans for the upcoming Budget presentation and subsequent debates.

Financial Secretary Hilary Hazel; the country’s Prime Minister and Minister of Finance, Hon. Dr. Timothy Harris; and Nevis’ Premier and Finance Minister the Hon. Vance Amory were some of the key officials present at Thursday’s Budget Planning Meeting of the Estimates Committee.

While speaking with the media, the Financial Secretary said although preparing the nation’s budget is serious business, the Estimates Committee takes pride in its job, considering that there are always more expenditure requests than available resources.

“The way that the Budget is structured in this current period is that we also try to look over the medium term but the Estimates Committee is primarily concerning what are the programmes and projects that government would be implementing in 2016,” Hazel stated.

She added, “We know we have gone through a process throughout the year because our financial year starts January and ends in December and so therefore, throughout the year, there’s a calendar of events and interactions with line ministries and other stakeholders in the public that we use all of this information to prioritise what the government would spend money on.”

The upcoming Budget presentation, she added, will also take into consideration some of the ideas proposed by the government’s social and economic partners who attended the National Consultation on the Economy.

“We are looking forward to having a very good Budget that has promised, as indicated by the Honourable Prime Minister at the National Consultations, that it would be premised on two main things, one, that there would be no new taxes and secondly, that we would not entertain a deficit budget,” the Financial Secretary said.

Premier Amory, who now holds a ministerial portfolio in the Federal Cabinet, shared his thoughts on the planning process.

“It’s the first time and clearly for all the years that I have served in the Federal Parliament, although I’ve been a member since 1989, I really have always been, during that period up until this year February, a member on the Opposition side so I’ve never really been involved,” Amory said adding that “the change of the times is good.”

Other members of the Federal Cabinet, including Cabinet Secretary Josephine Huggins, were in attendance.