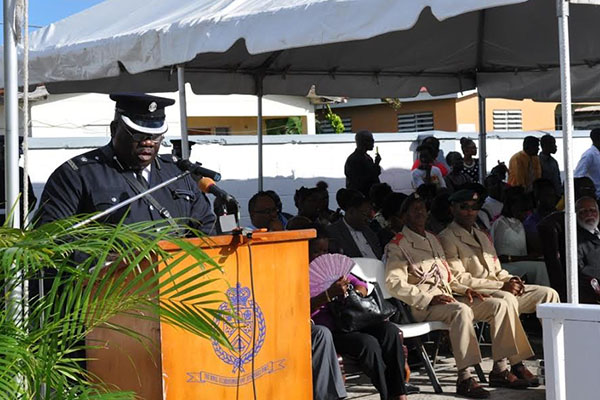 Basseterre, St. Kitts, (SKNIS) — The members of Course No. 39 that graduated at the Police Training Complex on Thursday (February 27) registered a number of milestones for the Royal St. Christopher and Nevis Police Force (RSCNPF).

While giving the Course Report, Commandant of the Training School Superintendent Lionel Moore revealed that when training began on July 01, 2013, the 28 males and 13 females made up the largest class of the past 20 years. Additionally, it was revealed that they were all citizens of St. Kitts and Nevis breaking a trend where other nationals from CARICOM member countries have had to boost the numbers over the past years. Thirty-six of those that enrolled successfully completed the course.

Superintendent Moore also highlighted another first that took place during the 26 weeks of training.

“For the first time some of the graduands were exposed to international training in specialized areas such as crime scene investigation, FBI (Federal Bureau of Investigation) homicide investigation, video interviewing training, motorcycle and bicycle training and others …” he revealed.

Attendees included His Excellency the Governor General, the Honourable Premier of Nevis, members of the Federal Parliament, proud parents and Prime Minister the Right Honourable Dr. Denzil Douglas who told the gathering, that government has invested a great deal of time and money in law enforcement to secure the security of the twin-island Federation.

The Prime Minister noted that the standards and operations of law enforcement have improved significantly which has led to a decrease in crime over the past two years. He stressed that the commitment and hard work of the security forces has been vital in this regard and so has the attention to foster better relations with the community as outlined in the RSCNPF Motto “Making a Difference in Community and Law Enforcement.”

“In order to make a difference in our community, it will be important to you to find ways to professionally and respectfully encourage good behaviour wherever you may go,” said Prime Minister Douglas. “It is important that you remain alert to those who are engaging in negative behaviour and to encourage instead along a positive path.”

The Prime Minister commended the friends and family of the recruits and thanked them for the support and encouragement they gave during their extensive training. He highlighted that the force offers a significant opportunity for personal and professional development and wished them well in their new career path.

“So go forth then, committed to being the very best that you can be, committed to being men and women of decency, discipline and high integrity,” said Prime Minister Douglas. “Go forth; go forth I say determined at all times to be police officers of which the nation and you can be very proud. Warmest congratulations again and I wish you much … success.”