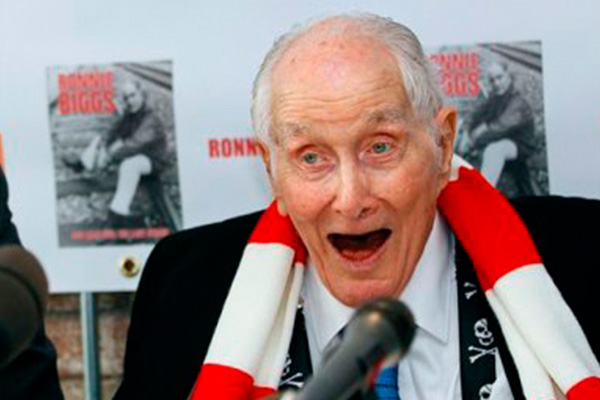 London (AP) — Ronnie Biggs was a petty criminal who set out to transform his life with the daring heist of a mail train packed with money.

The plan worked in ways he could never have imagined.

Biggs was part of a gang of at least 12 men that robbed the Glasgow-to-London Royal Mail Train in the early hours of August 8, 1963, switching its signals and tricking the driver into stopping in the darkness. The robbery netted 125 sacks of banknotes worth 2.6 million pounds — US$7.3 million at the time, or more than US$50 million today — and became known as “the heist of the century.”

Biggs was soon caught and jailed, but his escape from a London prison and decades on the run turned him into a media sensation and something of a notorious British folk hero.

He lived for many years beyond the reach of British justice in Rio de Janeiro, Brazil where he would sometimes regale tourists and the media alike with stories about the robbery. He appeared to enjoy thumbing his nose at the British authorities and even sold T-shirts and other memorabilia about his role in the robbery.

He was free for 35 years before voluntarily returning to England in 2001 in a private jet sponsored by The Sun tabloid.

Biggs died Wednesday at 84, daughter-in-law Veronica Biggs said. She did not provide details about the cause of death.

Most of the Great Train Robbery gang was caught and sentenced to long terms in jail. Biggs got 30 years, but 15 months into his sentence he escaped from London’s Wandsworth Prison by scaling a wall with a rope ladder and jumping into a waiting furniture van.

It was the start of a life on the run that would hone his image of being a cheeky rascal one step ahead of the law.

Biggs fled to France, then to Australia and Panama before arriving in Rio de Janeiro in 1970. By that time, life on the run and plastic surgery to change his appearance had eaten up most of his loot from the robbery.

In all, he spent more than 30 years in Brazil, making a living from his notoriety. For a fee, he regaled journalists and tourists with the story of the heist and offered T-shirts with the slogan “I went to Rio and met Ronnie Biggs … honest.”

The British media remained fascinated with him until the end. The day of his death coincided with a long-planned BBC television show about the robbery.

Biggs recorded a song with punk band The Sex Pistols titled ‘No One Is Innocent’, wrote a memoir called ‘Odd Man Out’ and even promoted a home alarm system with the slogan: ‘Call the thief’.

Biggs foiled repeated attempts to force him out by deportation, extradition and even kidnapping.

British detectives tracked him down in 1974, but the lack of an extradition treaty with Brazil saved him. When Brazil’s military government tried to deport him, Biggs produced a son Michael with a Brazilian woman and the law again prevented his expulsion.

In 1981, two men posing as journalists grabbed Biggs at a Rio restaurant, gagged him, stuffed him into a duffel bag and flew him to the Amazon River port of Belem. From there they sailed to Barbados, expecting to turn Biggs in and sell their story to the tabloids. But Barbados also had no extradition treaty with England and sent him back to Rio.

In 1997, Brazil’s Supreme Court rejected an extradition request on the grounds that the statute of limitations had run out. At the time, Biggs said he didn’t want to go back to Britain.

“All I have to go back to is a prison cell, after all,” he said. “Only a fool would want to return.”

But within a few years, debilitated by strokes and other ailments, Biggs began to yearn to see England again.

Britain’s tabloid Sun newspaper helped arrange his return, even chartering the private jet that flew him home. Aboard the plane was Detective Superintendent John Coles of Scotland Yard, who took Biggs into custody with the words: “I am now going to formally arrest you.”

Biggs spent less than a decade in prison, emerging as a frail shadow of his dapper “gentleman thief” image.

Biggs’ lawyers had long argued that he should be released on health grounds, although then-Justice Secretary Jack Straw objected, saying Biggs was “wholly unrepentant.”

Unionized train drivers, mindful that railway man Jack Mills never fully recovered after being hit over the head with an iron bar during the robbery, also lobbied to keep Biggs behind bars.

However, finally convinced that Biggs was a dying man, officials released him on Aug. 7, 2009, a day before his 80th birthday. He had been living in a nursing home since.

In late 2011, Biggs appeared at a London news conference to promote an updated version of his memoir. Unable to speak because of several strokes, he said through his son Michael Biggs that he had come to regret the train robbery and, if he could go back in time, he would now choose not to participate.

In 2002, Biggs married Raimunda Rothen, the mother of Michael. They survive him, as do two children — Chris and Farley — from his first marriage to Charmian Brent. A third son, Nicholas, died in a car crash in 1971.