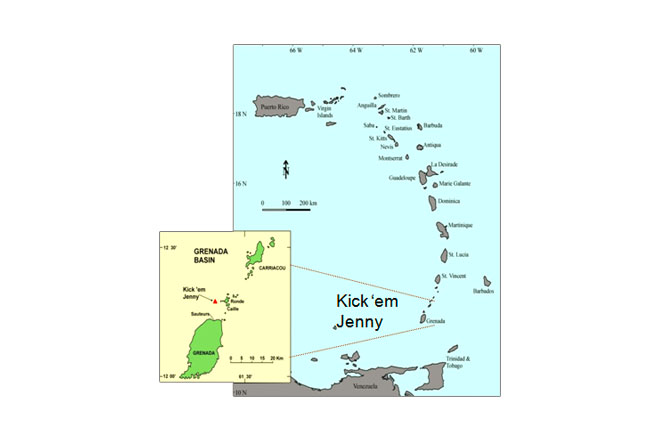 St George’s, Grenada — The Seismic Research Centre (SRC) at the University of the West Indies has reported that the activity levels at the Kick-‘em-Jenny submarine volcano just off the north coast of Grenada has reduced significantly over the weekend. No activity had been recorded since 6:00 pm on Saturday.

On Saturday, at around 5:50 pm, a team including a volcanologist from the SRC, Grenada’s acting national disaster coordinator, and a camera person, participated in a fly over of the Kick-‘em-Jenny area by helicopter. The volcanologist, Dr Frederic Dondin, who has conducted extensive research on Kick-‘em-Jenny, concluded, after his observations, that there was absolutely nothing unusual in the area.

Based on the above findings, and given the fact that the activity levels at Kick-‘em- Jenny has diminished, the government of Grenada, based on the advice of the SRC has lowered the alert level to Yellow with immediate effect.