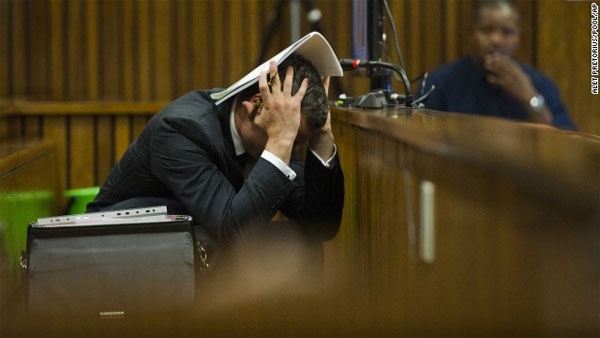 Pretoria, South Africa (CNN) — Gruesome images shown at his murder trial Thursday were too much for Oscar Pistorius to take. He vomited.

He had covered his face before, when bloody photos flashed across court monitors of his own bathroom, where his girlfriend Reeva Steenkamp lay after he shot her on Valentine’s Day last year.

Otherwise, the South African Olympic runner looked tired as he watched his defense lawyer painstakingly cross-examine a police expert, whose testimony a day earlier based on the door to that bathroom threatened to discredit him.

For a second day, attorney Barry Roux picked at forensic expert J.G. Vermeulen’s testimony with fastidiously detailed questions about the validity of evidence offered by the dents, gashes and scratches on the door.

On Wednesday, Vermeulen, a police colonel, provided some of the trial’s most dramatic testimony by swinging Pistorius’ own bat at that very door from Pistorius’ home, assembled in court for the judge in the Pretoria courtroom to see.

Pistorius, 27, has said that he bashed the door to get Steenkamp, who was 29, out of the locked bathroom by knocking a hole in it.

The prosecution does not dispute this. But where the prosecution and defense disagree is over the question of whether the runner was wearing his prosthetic legs at the time.

Pistorius’ natural legs are amputated below the knees, and he wears prostheses. He is widely known for the blade-shaped ones he dons for track competitions, which have earned him the nickname “Blade Runner.”