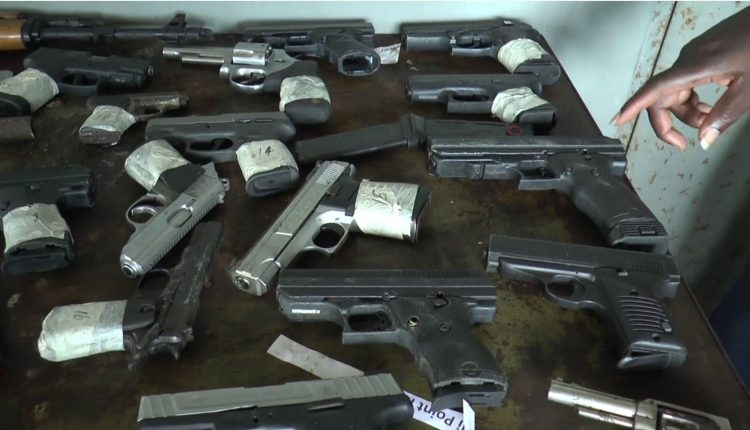 Basseterre, St. Kitts, September 28 , 2020 (ZIZ News): Thirty-one guns confiscated as part of the Ministry of National Security’s Peace Initiative were destroyed in the presence of members of the police high command and soldiers of the defence force at the defence force base on Monday.

Commissioner of Police Hilroy Brandy said the destruction of the firearms serves as reassurance to the public that the weapons have been in custody and did not return to the streets.

“As we promised, once we did our investigations, we promised all the weapons would be destroyed. In addition, one other firearm was taken off the street earlier this year which was also a part of the peace initiative that we will destroy this afternoon. So contrary to the Facebook post that some of these weapons are back on the street, you are here to witness that all 30 firearms will be destroyed this afternoon and to assure you that none of the firearms are back on our streets.”

Corporal Carlton Duncan Custodian for the police armoury outlined the range of guns that were confiscated.

Commissioner Brandy said the officers of the Police Force continue in their efforts to keep our streets safe from illegal firearms.

Since the effort of taking the 30 firearms from the streets, we are still continuing to make sure our streets and our homes are safe from illegal firearms. So far we have taken seven firearms off the streets so far for this year. Notwithstanding we are in the pandemic, police are still out searching and doing stop and search in order to recover anyone with an illegal firearm.”