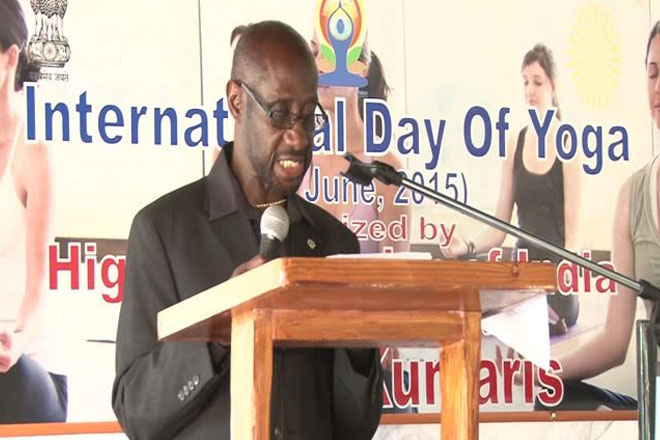 (ZIZ News) — His Excellency Sam Condor has reported to duty in his first assignment since being appointed as Ambassador Extraordinary and Plenipotentiary and Representative to the United Nations.

The Royal St. Kitts Hotel was the venue for the country’s first observance of International Day of Yoga and former politician, now Ambassador; His Excellency Sam Condor was among those who addressed the gathering.

Backed by the support of yoga lovers, and dignitaries such as Shri Batra of the High Commission of India in Guyana, Ambassador Condor explained the reason for the observance.

“This initiative, spearheaded by the Hon. Narendra Modi, Prime Minister of India, gained overwhelming support of the United Nations General Assembly when some 177 countries, including our own St. Kitts and Nevis, co-sponsored the Resolution No. 69-139 which was adopted on December 11, 2014. The support generated for this proposal is an indication of the significance placed by the international community on the benefits of health and well being,” he said.

A known promoter of sports and fitness, Ambassador Condor said by engaging in yoga and other fitness related activities, persons can live healthier lifestyles.

“This resolution is reminiscent of the Political Declaration of the Prevention Control of Non-Communicable Diseases, which had first been advanced through the efforts of CARICOM. I know this because yoga is a lifestyle choice that can help to foster good health. This is thus suggestive of a strong synergy between these two initiatives by our two countries,” he said.

The local observance of International Day of Yoga was held during a ceremony at Tiranga Restaurant at the Royal St. Kitts Hotel in Frigate Bay.