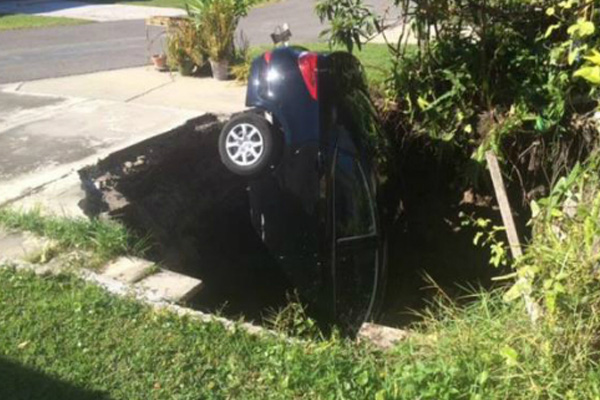 TAMPA, Florida (Reuters) — Residents in a central Florida community watched anxiously on Tuesday after two holes opened in the ground, including one that swallowed a car, forcing six families to evacuate their homes.

The first of the two holes opened on Monday morning in the Holiday Travel Park, a community for people aged 55 and over about 35 miles northwest of Tampa that houses some 500 residents during the peak winter months.

The hole was only four feet on each side when Pasco County Fire Rescue arrived on Monday at the property, authorities said in a statement. Within 15 minutes, it had grown big enough to swallow a car at its edge. The hole was measured at 10 feet wide and 10 feet deep on Monday afternoon.

The mobile home beside the hole has been condemned. Families were told not to stay in five nearby homes until the ground was found stable, officials said.

A second hole opened nearby on Tuesday, but officials said no buildings were immediately affected. A geologist was on the scene surveying the area.

“We can’t say what Mother Nature is going to do,” said Roberta Pickering, a park manager. “Luckily, this didn’t swallow any homes, praise the Lord.”

Authorities said they were not calling them sinkholes, which are typically formed by water erosion, until that had been confirmed by engineers.

Florida’s porous limestone foundation makes it prone to sinkholes. The resulting cavities are a common feature of the landscape, forming springs, lakes and portions of rivers.
Most sinkholes occur as naturally acidic underground water flows through and dissolves the underlying limestone. Communities in north and central Florida, and particularly in the Tampa Bay area, are especially vulnerable.

A sinkhole in the Tampa area last year swallowed a man who was sleeping in his bedroom. His body was never recovered.