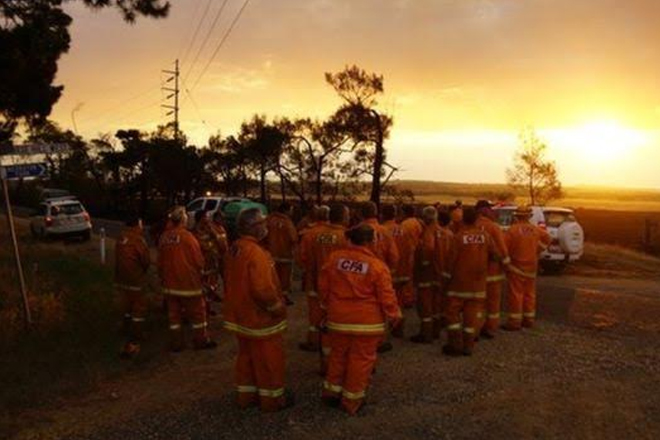 (BBC) Twelve Australian families have lost their homes to bushfires near Melbourne, days ahead of Christmas.

Fire authorities are also warning of dangerous hot and windy conditions on Christmas and Boxing Day.

Crews were still tackling a blaze at Scotsburn, west of the city, for a third day on Monday.

The Country Fire Authority’s (CFA) Craig Lapsley said one firefighter had been injured, but it was extremely fortunate no lives had been lost.

Some firefighters were struggling to stand due to the high temperatures and strong winds.

“All people are accounted for which is a great result. We were blessed we got rain,” Mr Lapsley told the ABC.

“The winds will be up a little bit this afternoon, the key issue is that it will progressively get hotter over the next few days and build to Friday, so we are sort of focusing now towards Christmas Day being the hottest day of the week and between now and then, we want to make sure any fire, any lightning strike that is hitting the bush we get on top of.”

Scotsburn residents told Australian media they were lucky to be alive.

“Our plan was to pack up the valuables and obviously photos and those sorts of things and leave, and we got a load in the car, and the fire turned, and that’s all the time we had,” Bruce Rae said.