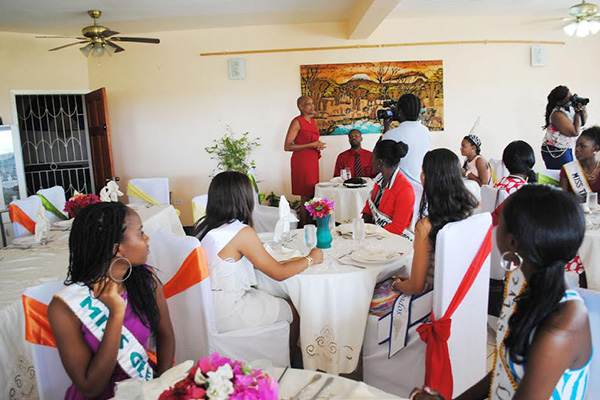 Basseterre, St. Kitts — When the nine contestants in the 34th edition of the Haynes Smith Miss Caribbean Talented Teen Pageant arrived at the Manhattan Gardens and Restaurant for lunch as guests of Mr Konris and Mrs Shamara Maynard, they were pleasantry surprised to receive advise from the Minister with responsibility for carnival activities.

Federal Minister with responsibility for Culture and whose portfolio also includes all carnival activities, the Hon Marcella Liburd, had graciously accepted to join the Maynards and members of the Labour Party West Basseterre Executive Branch as they treated the contestants to lunch, just a day before they faced each on stage for the coveted crown which incidentally is held by St. Kitts.

“I just want to say that this show to me does mainly three things,” said the Minister. “First of all I think it is an opportunity for young girls to really become far more confident and it is very important that you become confident, not just for the show but for life.”

“So it is a platform for you to be confident, for you to face challenges and to be really successful in whatever you are doing,” continued the Minister. “So sometimes when you are doing your talent or whatever you may have little issues here and there, but you know what, you have to overcome that and just go like it never happened.

Minister Liburd further informed the pageant contestants that it is also an education forum for them, so that they learn from each other, learn about other people’s countries, and that is also very important for everyone.

In the meantime, Chairperson of the Haynes Smith Youth Club, Mr Antonio Maynard, thanked Mr Konris Maynard (King Konris) for hosting the contestants and chaperons and other supporting teams to a very delicious lunch.

“We appreciate it very much,” said Mr Antonio Maynard. “All the girls and the company enjoyed it very much. Konris himself is a celebrity in his own right and it was important for him to also give them a pep talk with respect to performing arts, and so forth, and do not forget he is a role model himself.”

The senior Maynard, who is the Labour Party’s Candidate’s uncle, noted that it was good to have Konris hosting that very important event. Mr Antonio Maynard was accompanied by three Contestant and Activities Co-ordinators, Ms Akilah Nisbett, Ms Avril Wilkes, and Ms Diana Williams-Humphrey

As the chairperson of the Haynes Smith Youth Club, he said he wanted to make the event (Miss Caribbean Talented Teen Pageant) bigger and better for the benefit of the Village.

“The people living in the Village and the institutions in the Village such as the Dr William Connor Primary School, the Joseph N. France General Hospital among others, and we want all the support that we can get, all hands on deck for us to make this thing happen and to really make something out of it for everybody,” concluded the Chairperson.