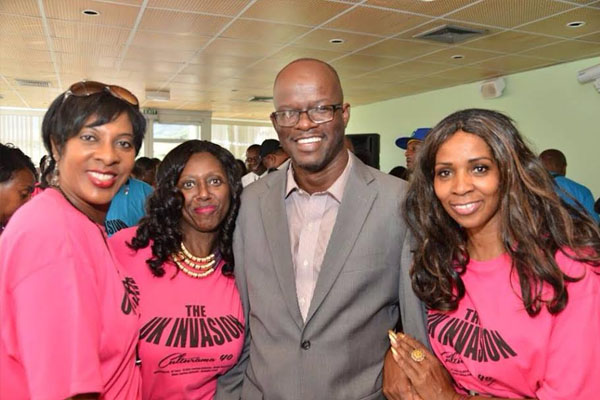 The group, which came onboard British Airways, organised by JC Tours, was greeted at the airport by Minister of Tourism Hon. Richard Skerritt; Minister of Foreign Affairs, Nevisian Hon. Patrice Nisbett, and the staff of the St. Kitts Tourism Authority.

ZIZ News reported Cris Collins, JC Tours Partner as saying that organising the trip would not have been possible without the help of Minister Skerritt.

“Last June, Jackie contacted me after a Sunday show and said to me why not we do something for Culturama’s 40th anniversary. I was reluctant because I know a lot of work was involved and I was trying to avoid that. But after two weeks of constant battering I eventually gave in. We made all the necessary contacts with a lot of help from Minister Skerritt. I must compliment him. He has been ever so helpful. The guidance, the encouragement, the support he has given us is unbelievable. And kudos as well to Oualie Beach Hotel who has been a partner in this whole project and they have done a marvellous job in accommodating us,” he said.

Director of JC Tours, Jackie Walker, said that the guests can expect to have fun and learn about the history of Culturama.

Minister of Tourism Hon. Richard Skerritt said that the Federation cherishes the group’s decision to return home to enjoy Culturama.

“What’s special about this group is that they are all Kittitians and Nevisians a very nice mix of old people young people some families with some kids and just about all of them are either born in Nevis born in St Kitts or have parents who were born here. So it was a very special event because we wanted to show these returning nationals how much we cherish their decision to come home for Culturama and also to enjoy a little bit of action in St Kitts,” he said.

The welcome event in the VIP Lounge, featured masquerades and steel pan music on the airport tarmac and local delicacies inside the lounge.

During the two week visit the nationals will tour, shop, cruise and party first in Nevis then in St. Kitts.