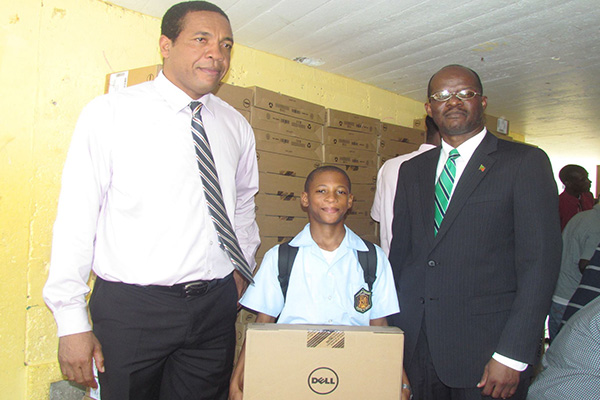 Charlestown, Nevis — St. Kitts- Nevis Minister of Foreign Affairs and National Security and Parliamentary Representative for Nevis 11, the Hon. Patrice Nisbett brought Christmas early to Nevisian first and second form students when he delivered their long-awaited laptops on Tuesday, Dec. 3. The jubilant students of Charlestown, Gingerland and the private Lyn Jeffers secondary schools received their personal Dell custom configured computers, as a gift from the Federal Government as a result of the intervention of the Hon. Patrice Nisbett.

A little more than a year ago it was agreed that the Nevis Island Administration would finance its own one-on-one laptop program. In January of this year government changed in Nevis and the new administration was not forthcoming with the funds to pay for the program. A few months ago students in St. Kitts received their computers and the students in Nevis began to query whether they would get computers or not. Fortunately, the Hon. Patrice Nisbet was approached and he responded positively.

Hon. Nisbett said, “It is very important that the program which started a few years ago continues in both St. Kitts and Nevis. Our children must be exposed early to computers and be able to access information on the world- wide web, especially for their educational advancement so that they can compete on a level playing field with children all over the world.”

Accompanying the Hon. Patrice Nisbett, was the Federal Minister of Technology Hon. Glen “Ghost” Phillip who in recent weeks has been informing the general public through the media, of the hard work that Mr. Nisbett has been doing to assist Nevis through the Federal Cabinet.

Hon. Phillip told the media, “I have witnessed on many occasions, the dedication and sincere concern that my fellow colleague, the Hon. Nisbett has given to Nevis in order to give residents assistance with scholarships, the People Employment Program (PEP) and legal counseling to assist the people of Nevis in order for the island to progress.”

Mr. Phillip also told the media that Mr. Nisbett has insisted and recently received the “go ahead” for an internet network system where children on Nevis, like St. Kitts, would be able to use internet service complimentary.

Premier and Minister of Education, the Hon. Vance Amory showed excitement and gratitude for the gifts handed to him by the Hon. Patrice Nisbett during the brief handing over ceremony at the Charlestown Secondary School. Mr. Amory thanked the Federal Government for their assistance and stated to the teachers, students and all gathered, that the computers are essential equipment for today’s world. He said he hopes that the children will care for these special tools of learning because they are an investment towards their future.