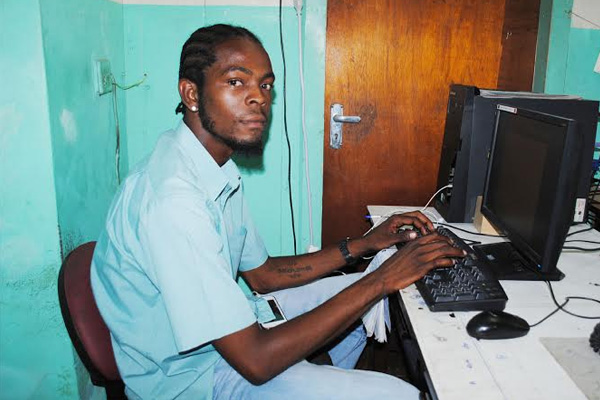 If it wasn’t for PEP, my CXC subjects would have gone to waste

Basseterre, St. Kitts — The young man from St. Pauls wanted to get the best life could offer. But after he dropped out from the nation’s premier educational institution the Clarence Fitzroy Bryant College (CFBC) before finishing his course due to lack of money he declared that he won’t fall down and play dead.

21-year old Javon Alford was a bright student through his primary school days at the St. Pauls Primary School, and at the then Sandy Point High School (now Charles E. Mills Secondary School) as he attained seven subjects, and English language was one of them.

Mr Alford is a People Employment Programme (PEP) participant under the Engaging Qualified Interns Project (EQUIP), which is one of the six components of the PEP, and is currently employed at the Federation’s informative weekly newspaper, the Labour Spokesman, as a news reporter since June last year.

“After the Prime Minister the Rt Hon Dr Denzil Douglas launched the PEP, I went to them and I was asked what my specific skills were,” recalled Mr Alford. “I have seven subjects at the CXC level, and I always had the love for English and so I thought maybe something in the field of language would be perfect and I was given the opportunity of reporting.

“I would like to thank the PEP greatly, because without the PEP I won’t be here. I would still be in the construction field – maybe. But the reality is that I won’t be practising what I love most – what I love doing most – which is speaking, writing and them things so.”

The ambitious Javon Alford said that PEP has been a great avenue for him and other young people in the Federation who would have been in similar difficult situations as he was. He observed that if REACH (Recognising Everyone’s Ability to Climb Higher) programme of the SIDF would have been in place at that time, he would have finished college and armed himself with better academic grades or even go on for further education.

“Me basically I did not go to school to be a construction worker,” said Mr Alford. “I went to school and I have got my seven subjects including English. So, if it wasn’t for the PEP then my subjects would have gone to waste because I would have been in the construction field where there is no use for them; no use for knowledge gained from schools.”

The young reporter’s supervisor at the Labour Spokesman is the veteran journalist and Managing Editor of the newspaper, Mr Dawud ‘Mudada’ Byron, who this year was awarded the Medal of Honour for his service in journalism and music. He was one of the five nationals of the Federation of St. Kitts and Nevis who received the 2014 National Honours.

According to Mr Byron, the young reporter has had challenges just like any youth of his age, but says that in terms of improvement, Mr Javon Alford is a bright person and has a lot of ability and as the editor of the paper, he doing his best to keep him on course.

“In terms of his ability, he has the subjects and he has the potential as he is well capable of doing what he is assigned to do,” observed Mr Byron. “He writes sports mainly or if I give him specifics to do he does them. I talk to him like a parent. He gets emails from the football association and he will write stories.”

The Labour Spokesman is owned by the St. Kitts Nevis Trades and Labour Union, which is an advocacy organisation for workers in the Federation, and according to the Union’s General Secretary Mr Batumba Tak, PEP is a good initiative by the government as it has empowered the youth of the country.

“PEP is a very good initiative by the Government to take a lot of people from the streets and put them to do something that they could feed themselves and their families, and pay the bills as well,” said Mr Tak. “The Union appreciates that and the Union supports that, so we give our full support to the Government.”