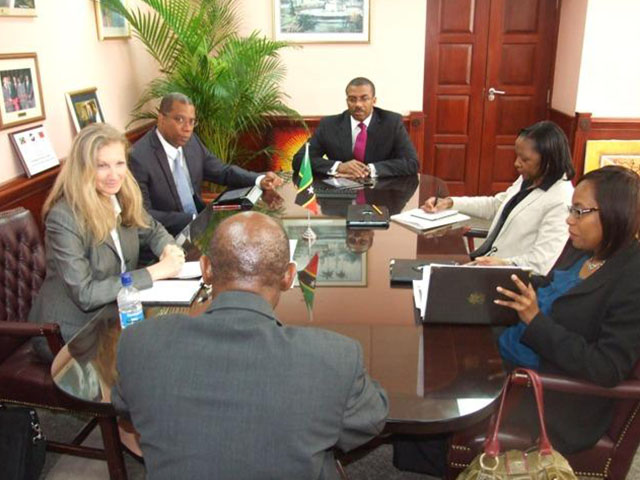 Basseterre, St. Kitts (SKNIS) — The International Monetary Fund (IMF) has affirmed its confidence in the economic performance of the federation in a presentation to the media yesterday (May 21 2014).

The Fund affirmed that “the economic recovery in St Kitts and Nevis has gathered momentum with real GDP growing at an adjusted rate of 3.8 per cent in 2013 -reflecting a pick-up in tourism, a strong expansion in construction activity related to large Citizenship By Investment inflows, substantial increase in public sector investment, and impetus from the People Employment Programme (PEP)”.

IMF Country Representative for St. Kitts and Nevis Ms. Judith Gold outlined to the media a number of areas in which the performance of the federation met and exceeded expectations indicating that the federation had not used the full amount of money originally obtained from the Fund. This, she pointed out, was indicative of sound economic management.

Prime Minister, the Right Honourable Dr. Denzil Douglas stated that the federation’s economic approach and priorities continue to move the Debt to GDP ratio in the right direction which is expected to settle at some 60% if current practices are continued. He also noted that a recent statistical analysis reveals an increase in the number of working, income-earners in the Federation by some 50% in the last 2 decades.  “We entered office with some 18,000 Kittitians and Nevisians working.” said Douglas.  “Today, we have increased that number to 27,000.  In addition, when we assumed office, those workers were generating some $247 million.  Today the 27,000 are generating $710 million.”