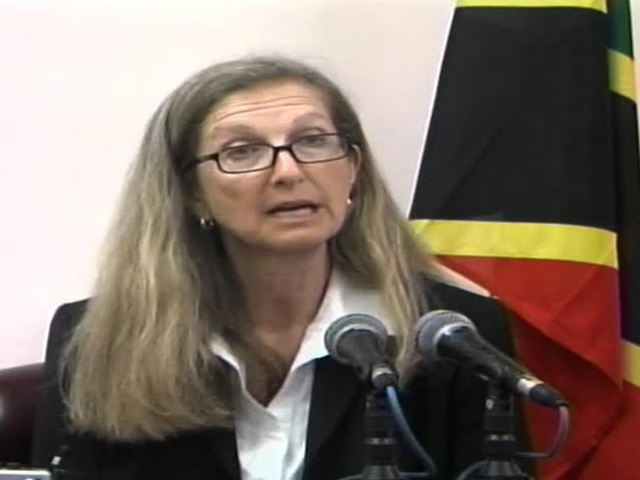 (ZIZ)– “St. Kitts is doing quite well and is poised to continue to do well,” were the closing words of the International Monetary Fund’s (IMF) country representative Judith Gold who addressed media representatives and listeners and viewers of ZIZ radio and television on Wednesday during a press conference on the country’s current financial status.

The midday conference was held in the Parliamentary Lounge at Government Headquarters and provided an update on the IMF’s ninth and final review under the Standby Arrangement (SBA) that supports the government of St. Kitts and Nevis’ Home Grown Programme.

“At the end of our mission, we have appraised that the growth in the economy has recovered at a healthy pace that economic activity is expanding at 3.8 percent. Debt has been brought down substantially over a third from 164 percent of GDP to 104 and with the ongoing implementation of the government’s reformed programme it is set to decline to 60 percent by 2020,” Gold said.

Gold also listed some of the programmes that had contributed to the country’s economic growth.

“We have also determined that both the fiscal and external balances are continuing to improve substantially benefitting from CBI influence as well as other investments,” she said.

Gold then described the progress made by the federal government as a “welcomed development.”

“Part of this expansion reflects very rapid construction activity and part reflecting the Citizenship by Investment influence into the economy, part of it has been supported by public sector investment in roads, in lights, and part of it reflects the PEP programme that has absorbed a significant amount of the unemployed individuals in the economy,” she said.

The IMF’s SBA to support the government of St. Kitts and Nevis was approved on January 27th 2011.