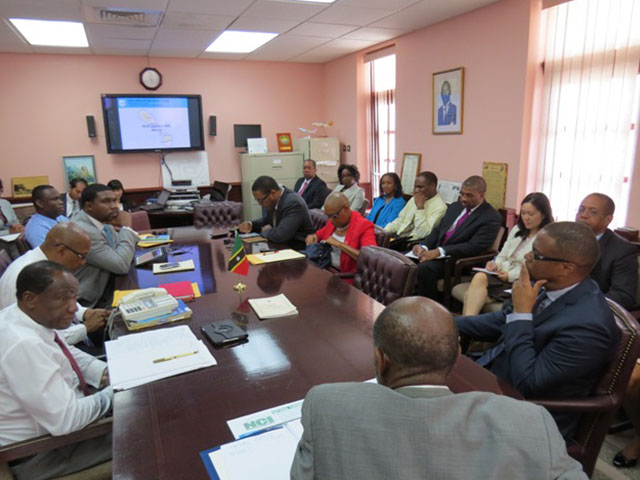 IMF says the economic recovery in St. Kitts and Nevis has gathered momentum

Basseterre, St. Kitts (CUOPM) – The Prime Minister of the Federation of St. Kitts and Nevis, the Right Hon. Dr. Denzil L. Douglas and the Acting Premier of Nevis, the Hon. Mark Brantley were told by the International Monetary Fund (IMF), that “the economic recovery in St. Kitts and Nevis has gathered momentum.”

Ms. Judith Gold, Head of the IMF Mission to St. Kitts and Nevis told the Cabinets of the Federal Government and the Nevis Island Administration on Wednesday the recovery was as a result of “real GDP growing at an estimated 3.8 percent in 2013, reflecting a pickup in tourism, a strong expansion in construction activity related to large Citizenship-by-Investment (CBI) inflows, a substantial increase in public sector investment, and impetus from the People Employment Program (PEP).”

“Preliminary data for 2013 shows wages increased by 10 percent while employment expanded by 19 percent, mainly reflecting the impact of the PEP. Inflation declined to 0.4 percent at end-2013, and continues to be low, at 0.1 percent at end-March 2014 (y/y). The financial system is stable although the recovery in economic activity has not yet translated into increased lending to the private sector, as banks remain cautious. The external position continues to benefit from the recovery in tourism receipts and a strong increase in CBI inflows. At end-2013 international reserves were at a comfortable level of about 8 months of imports (or 6 months excluding IMF disbursements),” a release at the end of the Joint Cabinet Meeting said.

The release added that the focus of this mission was to assess the quantitative performance at end-March 2014 under the SBA, review the ongoing structural reforms, and confirm fiscal targets for 2014.

“The fiscal out turn for March 2014 was in line with programme targets as a result of strong revenue performance notwithstanding somewhat higher than anticipated capital expenditure. These first quarter results suggest that the fiscal targets for the remainder of 2014 are achievable with continued policy efforts to contain government employment, and consequently, the public sector wage bill, as well as spending, while continuing to strengthen revenue collections. Progress was made on structural reforms. The implementing regulations of the 2011 Civil Service Act (pertaining to recruiting, discipline, promotion, and standing orders) were made operational by Official Gazette on May 15, ahead of the end-June 2014 scheduled date, while a new Customs Law is expected to be submitted to Parliament by end-May,” the IMF Release said.

The IMF Mission has commended Prime Minister Douglas “for the substantial progress made under the St. Kitts and Nevis’ home-grown programme, supported by the three-year SBA.”

“They are also the result of very large inflows under the CBI programme that provided resources to gear up public spending, address social needs, and support private investment,” said the IMF.

It added considerable progress was also made with the initiation and implementation of major structural reforms under the programme.

“We expect that 20 of the 24 structural benchmarks relating to strengthening fiscal management, completing the debt restructuring and maintaining financial stability, will have been implemented by the end of the programme period, and a further two will be completed within the year. As a result of these efforts, tax administration has been restructured, public expenditure management improved, and the overall public sector is now considerably more effective. Nevertheless, continued efforts to sustain implementation and make further progress in completing the outstanding structural benchmarks will be needed for the structural reforms to deliver on the promised improvement and strengthening of public financial management and continued decline of indebtedness,” the IMF said.

The IMF said there are still critical challenges facing the nation.

“First and foremost continued effort is needed to sustain the recovery and ensure that growth continues. This will require further reforms to improve the business environment, for both domestic and foreign investment, sustain the recovery in tourism, and maintain sound macro economic policies,” said the IMF.

It said that in this regard, fiscal discipline and ongoing reforms will be needed, as well as an effective and transparent framework to manage CBI and SIDF resources to reduce the country’s high vulnerability to exogenous shocks, to continue to strengthen public sector finances, and to ensure that resources are used productively.

In this context, while PEP has played a pivotal role in accelerating the economic recovery and creating jobs, we support efforts to contain its costs, including by having the private sector shoulder part of the employment expense.

The IMF Mission met with the Prime Minister, the Premier of Nevis, the Cabinet, the Financial Secretary of St. Kitts and Nevis, the Acting Permanent Secretary of Finance in the Nevis Island Administration, other senior government and ECCB officials, as well as representatives of the banking and business community.

The Mission also made a presentation to the Chamber of Industry and Commerce as part of the IMF’s ongoing outreach initiative in St. Kitts and Nevis.

It said that although the SBA ends on July 26, 2014, the IMF will continue to maintain its close policy dialogue with the Government of St. Kitts and Nevis in the context of the Fund’s Post-Program Monitoring Framework.”

It thanked the authorities and technical staff for their open discussions and excellent cooperation during this review and over the course of the IMF supported programme.

The visit was the Ninth and final review under the three-year Stand-By Arrangement (SBA).