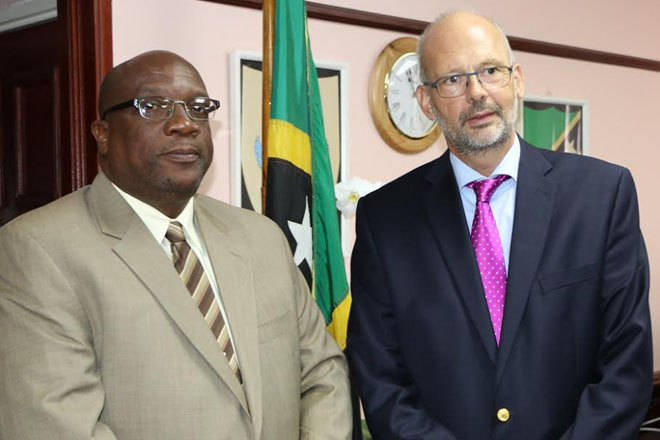 Importance of European Union Highlighted in meeting with Prime Minister

During the meeting on May 27, Prime Minister Harris expressed gratitude for the opportunity to discuss the way forward with such an important stakeholder and partner as the European Union. He said that the meeting also plays an important role in the advancement of particular programmes such as the Sugar Adaptation Programme that allows for approximately €70 million over the period 2006 to 2017 to be provided for St. Kitts and Nevis, in order to facilitate a smooth economic transition following the closure to the sugar industry.

“Now we are looking forward to support for our security programmes and with the next EDF [European Development Fund] cycle coming up, we are anticipating support, particularly, in the area of alternative energy,” Prime Minister Harris said at the courtesy call by Ambassador Barford. “We also expect to update you, on the Capital Projects which the EU has funded.”

EU-funded projects include those located at the Clarence Fitzroy Bryant College (CFBC), at the Joseph N. France (JNF) General Hospital, and the construction of the Security Training Centre at Lime Kiln. Matters such as the current political situation, including relations with Nevis were also on the agenda.

Ambassador Barford expressed pleasure at returning to the Federation, noting that for the first time, he had journeyed to Nevis where he met with Premier Vance Amory.

“I also had a conversation with the Minister of Foreign Affairs [Honourable Mark Brantley] in St. Lucia,” he revealed. “The dialogue between the European Union and CARIFORUM will lead to a very important conference in Brussels in two weeks time … the EU Summit, to which the Prime Minister has kindly confirmed his participation, and we look forward to seeing you in Brussels.”

CARIFORUM consists 15 Caribbean states of Antigua and Barbuda, the Bahamas, Barbados, Belize, Dominica, the Dominican Republic, Grenada, Guyana, Haiti, Jamaica, St. Lucia, St. Vincent and the Grenadines, St. Kitts and Nevis, Suriname, and Trinidad and Tobago. The meeting is the EU-CELAC Summit, scheduled for June 10 and 11 that brings together European, Latin American and Caribbean leaders to strengthen relations between the regions.