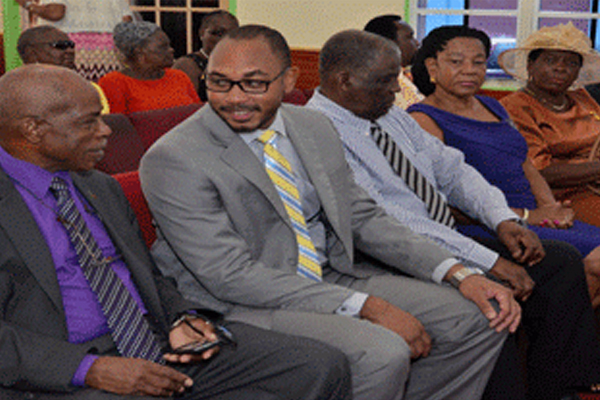 Basseterre, St. Kitts (PAM Central Basseterre Group) – The People’s Action Movement, (PAM), Candidate for Central Basseterre, in the upcoming elections, lawyer Jonel Powell, on Sunday kicked off a series activities designed to highlight some of the critical issues confronting the people of the constituency and also tailored to promote a spirit of caring and sharing for the less fortunate in the district.

Over 40 supporters of the party joined Powell as he worshipped at the New Testament Church of God on Central Street, in the heart of the constituency. Included amongst those who were in attendance were Dr. Sir Kennedy Simmonds, the country’s First Prime Minister, as well as current PAM Leader, Shawn Richards and former Leader Lindsay Grant and other PAM candidates. Leader of the People’s Labour Party, PLP, Dr. Timothy Harris and his Deputy, Sam Condor, also joined Powell at the service.

While there, Powell, who is also the Deputy Leader of PAM, used the occasion to present “Care Packages” to three members of the congregation. An undisclosed financial contribution was also presented to the head of the church, Pastor Hepburn.

In making the presentation, Powell explained that it was important to support the work of the church and he hoped that the financial package would aid the mission of the religious organization, as it continues to administer the word of God while also caring for the social needs of the people it serves, not only in Central Basseterre, but nationally.

Powell added that during the course of this week, at least four persons each day within Central Basseterre will be presented with Care Packages in all areas of the constituency, no matter their political beliefs. He said the determining factor will be driven by “need”, to ensure that those most vulnerable in the community will be assisted, given the present difficulties being faced in what was described as “these trying economic circumstances.”

Powell is also scheduled to engage his constituents during the course of this week when he embarks on a number of “walk-through” sessions, starting on Tuesday 26th August, with visits in the Market Street, Freeman’s Village and Wades Garden areas.

Other visits, he said, will be made to New Road on Wednesday 27th and the Irish Town McKnight districts on Thursday 28th August. Each Walk Through begins at 4:30pm, from the Constituency Office, located on the corner of Cayon Street and Thibou Avenue. Other districts will be visited in days to come, explained the candidate.