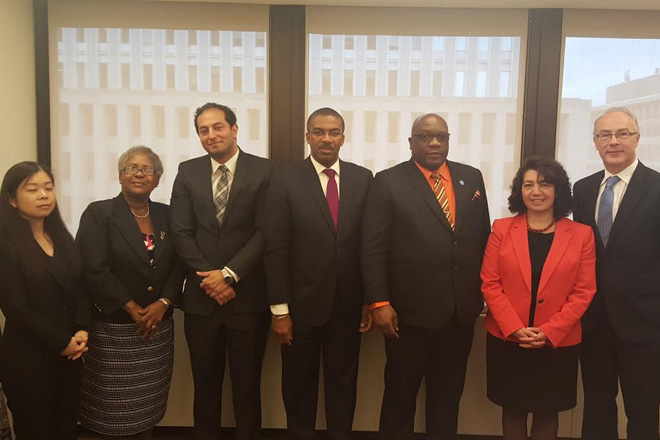 In Talks with PM Harris, IMF Notes St. Kitts and Nevis’ Sustained Growth Over Past 12 Months

Cabinet Secretary Mrs. Josephine Huggins and Mr. Justin Hawley, Counselor at the Embassy of St. Kitts and Nevis to the United States of America, accompanied the Prime Minister to the IMF headquarters.

Yesterday, Mr. Hawley gave a report on the meeting. “The IMF officials noted that St Kitts and Nevis had experienced significant and sustained economic growth over the past 12 months. The officials further expressed that the robust nature of the Federation’s economy was rooted in strong performances from the tourism, construction and banking sectors. The IMF also commended the Government for pursuing a prudent and sound fiscal strategy that has led to a decrease in the debt-to-GDP ratio to levels that have not been seen in several years. Additionally, the officials applauded the Government’s commitment to transparency and accountability, and further noted that the restructuring of the Sugar Industry Diversification Foundation was a step in the right direction,” Mr. Hawley said.

Last month, Ms. Ötker-Robe and a team from the IMF visited St. Kitts and Nevis as part of the routine Article Four Consultation to the country.

According to the IMF’s website, the usually annual consultation is known as an “Article IV consultation” because it is required by Article IV of the IMF’s Articles of Agreement.

An IMF team, led by Ms. Judith Gold, conducted the 2015 Article IV Consultation to St. Kitts and Nevis from June 8th to 19th and also held the First Post-Programme Monitoring review here last year. Post-programme monitoring is done to ensure the continued viability of a country’s economy after the completion of its IMF-supported programme. The three-year IMF Stand-by Arrangement for St. Kitts and Nevis was completed on July 26, 2014.

Counselor Hawley said about last week’s discussions with the IMF that, “The Honourable Prime Minister assured that the Federation would continue along the path of fiscal consolidation, with the ultimate aim to reduce the Government’s deficits and debt accumulation. To that end, the Government has sought to create a resilient economy that not only facilitates economic growth, security and sustainability, but also is able to withstand external economic shocks.”

Prime Minister Harris and his Administration believe clean, renewable energy has an important role to play in building our nation’s economic resilience, and they have made promising advances on this front. For instance, a geothermal project in Nevis is on target to begin operation at the end of 2017.

During the opening session of the Regional Geothermal Forum at the St. Kitts Marriott Resort yesterday, Tuesday, May 10th, Dr. Harris said, “Energy independence is a key driver of sustainable development and an engine of economic growth, and my Government intends to keep the key to the sustainable future in the ignition and take our feet off the gas pedal.”

“Take our feet off the gas pedal” refers to St. Kitts and Nevis’ large dependence on imported fossil fuels, which are harmful to the environment and costly to consumers and the economy.

The IMF high officials congratulated Prime Minister Harris for the transformation of the People Employment Programme (PEP) to date and offered further policy support in relation to PEP.