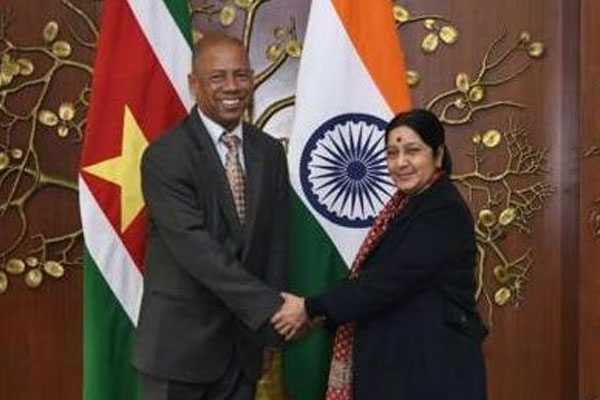 Paramaribo, Suriname — Sushma Swaraj, the foreign minister of India, will cement the elusive relationship between her country and Guyana and Suriname when she visits the Guyanas in March to pave the way for the visit of the Indian Prime Minister Narendra Modi to Guyana and Suriname. If the visit materializes, Modi will become the first Indian head of state to visit Guyana since Indira’s Gandhi’s visit to Guyana in 1968.

Indians, also known as Hindustanis in Suriname, make up about 40 to 50 percent of the population in Guyana, Suriname and Trinidad and Tobago. They began arriving as indentured workers in Guyana in 1838 and in Suriname in 1873, mainly from the northern Indian states of Uttar Pradesh and Bihar, and comprised about 80 percent Hindus and 20 percent Muslims.

Modi’s visit to Suriname was confirmed by President Desi Bouterse in his address to parliament late last year. Bouterse will also make an official visit to India in 2015.

A large business delegation from India will accompany Swaraj during her visit.