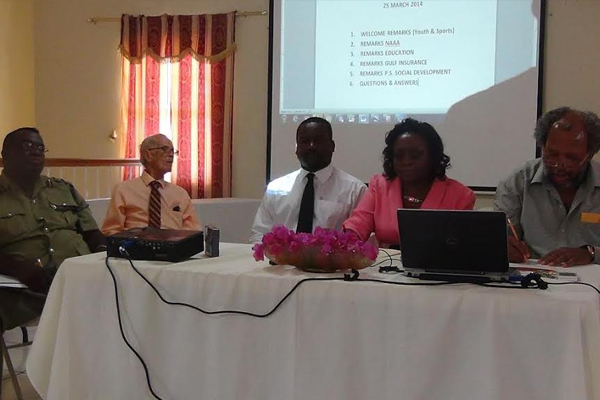 Sports Page — The much anticipated Inter Primary sports meet for 2014 which is hosted by the Nevis Amateur Athletic Association (NAAA) and the Education Department was officially launched on Tuesday 25th March.

The session was chaired by Mr. Jamir Claxton, Ag Director of Sports who indicated that a child friendly initiative will be put in place for the meet this year.

President of the NAAA, Lester Blackett noted that the advertisement for the meet started a long time ago, during the individual school meets.

He noted that the meet will commence at 11am and finish by 6pm.

He also stated that updates on races; photo finish and slow motion reviews will be available via a big screen to be set up at a strategic point in the Park

He further indicated that lots of agencies are involved in making the event a success including LIME, Cable TV. Public Works; the Police and many more.

He beseeched spectators, parents, and Head teacher’s coaches etc to put the child friendly initiative in place and have a competitive but friendly and encouraging environment, even to the point of cheering in the last competitor to the finish line.

Education officer, Mrs. Averil Elliot stated that the theme for the day is: ‘Everyone is a winner.’

She urged sensitivity for the athletes and the promotion of sportsmanship.

She hoped that the adults would be supportive of all of the athletes.

She made the revelation that the Patron for this year’s meet is Ms Kasheba Daniel—former student of St.John’s Primary School.

She revealed that the entrance fee is $10.00 for adults and $5.00 for children. There will be no charge for teachers of primary schools, the Special Education Unit and pre schoolers.

Longstanding sponsor of the prestigious event, Gulf Insurance LTD, was represented by Mr. Arthur Evelyn who addressed the gathering, ably assisted by one of his senior staff members, Mrs. Lorraine Browne.

He stated that his company recently went through a difficult period, having received a letter from the Prime Minister that they could not add any new policy holders

This went on for about a year and hurt the company. That hurdle has now been cleared and the company is recovering.

Permanent Secretary in the Ministry of Sports Mr. Keith Glasgow took time to point out that his Ministry does not coordinate the major event but plays a supportive role.

He wished the organizers every success

Superintendent of Police Mr. Hilroy Brandy, Indicated that there has been a drop in the crime rate over the last three years and gave comparative figures.

He noted that the Police will be out in full force on the day and individuals entering the Park will be screened for guns and other weapons. The main gate will be used for entrance and exit of the Park.

Parking will be available at the Villa grounds and there will be no traffic flow from central Charlestown past the Park en route to Gingerland.

The media houses present then fielded questions to members of the head table.

The questions ranged from issues pertaining to the logistics of screening of weapons; to the possibility of St.James’ and VOJN teaming up as one school and the reasons behind the joint championship tie of 2013.

Mrs. Elliot revealed that a formal request was received from the VOJN and the St. James’’Primay for the two schools to team up and compete as one body.

She however pointed out that the positive response was put on hold as there were quite a number of logistics to be worked out but noted that the issue will be addressed for next year.

The participating schools are:

The meet will commence at 11 am with the march past at the ET Willet Park on April 2nd and the first race is set to commence at 12.00 noon.