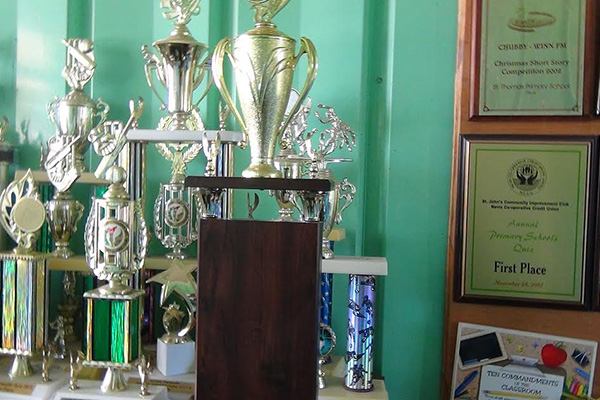 Interprimary Trophy Gets To St.Thomas’ Primary

A brief presentation ceremony was held at the St.Thomas’ Primary School on Tuesday 14th January.

The trophy is the trophy to be shared between that school and the Charlestown Primary School as joint winners of the 2013 Gulf Insurance Inter Primary championships held in Nevis.

Coach at the St.Thomas’ Primary School Eddy Caines Richards was less than impressed however.

He pointed out that as far as he was aware, following internationally accepted standards, in the case of joint winners, where there is a defending champion, as was the case with the St.Thomas’ Primary School, the defending champions would be allowed to hold on to the original trophy and the other joint winner would be given a replica.

Additionally, he noted that even if the trophy was to be shared equally between the two winning schools, it was puzzling to him that the Charlestown Primary was allowed to keep it from the Inter Primary date in April of 2013, until Tuesday 14th January 2014.

He also opined that the trophy which currently sits on the desk of Headmistress Norlene Smithen, would not be there for long, as this is another sports term and probably within the next couple of weeks, the trophy is due to be displayed at Evelyn’s Drug store, as is the customary practice ahead of the Inter Primary event.

Headmistress Norlene Smithen declined to comment, except to say: “What is done, is done.  I won’t be the one crying over spilt milk.’

Meanwhile Coach Caines and his coaching staff have already started training the children at the school for the upcoming school meet.  As the athletes completed their hill routines at the premises of the St.Thomas’ Anglican church, Caines observed that some of his key athletes from last year, have moved on to the Charlestown Secondary School but noted that ‘athletes are made,’ so the aim of the coaching staff is to bring a set of new stars to the fore this year.

‘St.Thomas’ missed out on championship honours for nearly 30 years, so now we have started to win, we plan to win for another 30 years,’ he declared with conviction.