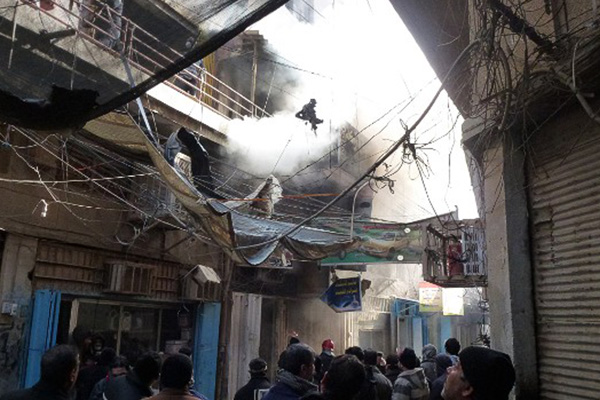 (CNN) — At least 25 people were killed and 30 others injured in three bombings that hit the Iraqi capital on Wednesday morning, Baghdad police officials said.

All three attacks struck close to checkpoints for entry to the city’s Green Zone, a heavily fortified area that houses Iraqi government offices and the U.S. and British embassies.

In the deadliest attack, a suicide bomber targeted a security checkpoint near the Green Zone, Iraqi Interior Ministry spokesman Brig. Gen. Saad Maan Ibrahim said. Police officials said the bomber struck a restaurant that is frequented by Iraqis going into the Green Zone.

The second blast occurred near the entrance to Iraq’s Foreign Ministry building. Police and residents said a car bomb exploded in a parking lot opposite the building, while the Interior Ministry said it was a suicide bombing.

The third explosion took place in the Al-Sanak area of Baghdad, one of the capital’s main commercial areas.

Police officials did not give a breakdown of how many people were killed and injured in each blast.

The United Nations’ special representative in Iraq, Nickolay Mladenov, condemned the violence “in the strongest terms.”

“Baghdad today regretfully suffered a series of terrorist attacks,” he said in a prepared statement.

“Those who orchestrate such attacks should be condemned by all political, religious and civic leaders in this country. Iraq political leaders should show national unity in dealing with such threats and unite against terrorism.”

Iraq’s Foreign Ministry has been targeted in the past.

The worst attack was in August 2009, when it was hit by a suicide truck bomb and dozens of staff were killed and injured.

Another government building, the Transport Ministry, was subject to an attack by gunmen last week.

The militants seized part of the building and took civil servants hostage before being driven out by security forces.

The United Nations said 2013 was the deadliest year in Iraq since 2008, with almost 8,000 people killed in violence, most of them civilians.

The figures for January also make grim reading. According to the U.N. mission in Iraq, 618 civilians and 115 members of the country’s security forces were killed in violence or acts of terrorism.

The U.N. tally does not include those killed in a fresh wave of violence in Iraq’s Anbar province, to the west of Baghdad, where al Qaeda-backed militants and Iraqi security forces have been fighting since the end of last year.