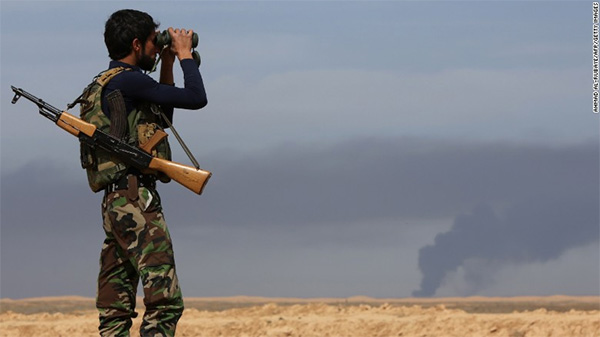 Iraqi forces retake most of Tikrit from ISIS

Baghdad (CNN)– About 75% of the besieged Iraqi city of Tikrit is now back in government control, the head of a key paramilitary force taking part in the attack told CNN on Thursday.

The other 25% is in the hands of about 150 ISIS fighters who continue to hold out, said Main Al-Kadhimi, commander of the Hasd Al-Shaabi militia.

The predominantly Shia militia has been working with Iraqi troops as well as Sunni fighters to try to regain Tikrit from ISIS.

The hospital is a few blocks south of the presidential palace.

Tikrit, best known to Westerners as the birthplace of former Iraqi dictator Saddam Hussein, fell in June to ISIS, which has captured large areas of Iraq and Syria for what it says is its Islamic caliphate.

ISIS wasn’t making it easy, however. The Sunni extremist group blew up a key bridge near Tikrit, preventing the joint Iraqi forces from using it to cross the Tigris River to approach the city from the east.

There have been several failed attempts to recapture Tikrit since the second half of 2014. If Iraq regains control of the city, it could mean that retaking Mosul — a city 10 times bigger — is possible.

The Tikrit offensive involves around 30,000 fighters.

Also assisting is Iran, which has provided advisers, weapons and ammunition to the Iraqi government. According to the Pentagon, Iranians may be operating heavy artillery and rocket launchers as well.

Gen. Martin Dempsey, chairman of the U.S. Joint Chiefs of Staff, told a hearing of the Senate Foreign Relations Committee on Wednesday that the consensus was that Iran’s involvement was positive in military terms. “Anything anyone does to counter ISIS is in the main a good outcome,” he said.

But Dempsey also voiced concern over what might happen after ISIS is defeated.

A key question, he said, is “whether the government of Iraq will remain on a path to provide an inclusive government for all of the groups” in Iraq.

Tikrit could act as an important testing ground, with some observers concerned that if the predominantly Shia militias seize control, thanks in part to the support of majority Shiite Iran, they could carry out reprisal attacks against the remaining Sunni population there.

This could inflame already simmering sectarian tensions within Iraq and make future efforts to retake Mosul and bring peace to the country yet more difficult.

Anthony Cordesman, a security expert at the Center for Strategic and International Studies, said it was an issue to be “extremely concerned” about as Iraqi forces gain ground in Tikrit.

“It’s already been very clear to Iraqis that this is an Iranian-led operation and not one which has the support of the coalition,” he said. As some Iraqis question why the United States has not taken more decisive action, he said, “this may be a case where Iran may be gaining very serious influence.”

If there are reprisals in Tikrit and it becomes a “Shiite-on-Sunni struggle,” Cordesman said, then not only will Iran’s influence increase “but you can see the country divide and and Islamic State (ISIS) be replaced by a conflict between Iraqi Shiite and Sunni.”

Strong leadership will be needed from the government in Baghdad, headed by Prime Minister Haider al-Abadi, militia leaders and key religious figures in order to prevent this outcome, he said, with a lot already being done on this front.

The challenge will be ensuring that fighters on the ground, some angered by the killings of their own relatives by ISIS, do not seek vengeance against Sunni communities who they suspect of supporting the group.

Ramadi under fierce assault by ISIS

While Iraqi forces piled the pressure on ISIS in Tikrit, the Sunni extremist group continued to flex its muscles in Iraq’s western Anbar province.

ISIS launched a new offensive on the city of Ramadi, west of Baghdad, on Wednesday morning, Faleh al-Issawi, the deputy head of the Anbar Provincial Council, said in a statement.

The city is being attacked “from all directions,” with ISIS firing more than 150 mortar rounds and rockets, he said, and explosives-laden vehicles used to attack security checkpoints and a bridge.

This is “the fiercest attack by ISIS” seen on Ramadi, al-Issawi said, adding that the Iraqi air force was urgently needed.

Officials believe “this is an ISIS response to the Tikrit operation that is ongoing in the north,” he said.

Elsewhere in Anbar province, Iraqi security forces have managed to wrest back most of the town of Karma, near Falluja, from ISIS, said Sabah Al-Karhout, the head of the Anbar Provincial Council, on Wednesday.

Dozens of ISIS militants were killed in clashes with Iraqi soldiers, he said by telephone. The second phase of the operation is to clear any remnants of the ISIS force from the town and remove any bombs left behind.

Iraqi security forces were fighting side by side with Shia Hashd Al-Shaabi units and local tribesmen, Al-Karhout said.

Health officials in Falluja told CNN that the Falluja general hospital received the bodies of 25 ISIS militants killed in the Karma battle.

ISIS is also battling in many places far from Tikrit, including Syria, where the militant group is more on the offensive, according to the Syrian Observatory for Human Rights (SOHR), a London-based monitoring group.

“Hundreds of ISIS militants launched a large scale offensive on Ras al Ayn, a Syrian strategic border town with Turkey on Friday,” SOHR said in a statement Wednesday. “They made some advances there and seized Tal Khanzir.”

Clashes are still ongoing between the Kurdish People’s Protection Units (Kurdish YPG) and ISIS fighters, with dozens killed from both sides, SOHR said.