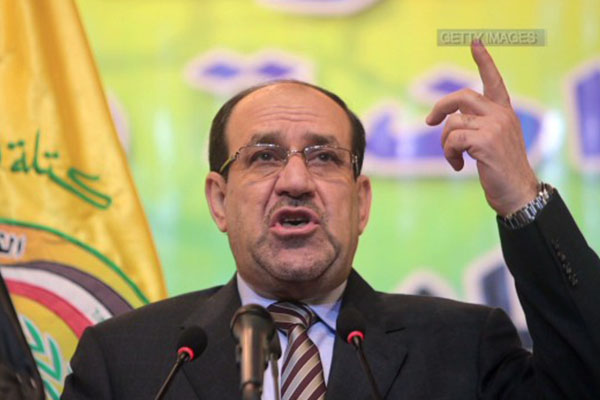 (CNN) — With a backdrop of rapidly growing violence, Iraqis voted Wednesday in their first nationwide polls since the 2011 withdrawal of U.S. forces

Prime Minister Nuri al-Maliki is battling for a third term in office, but faces fierce opposition with sectarian violence at its most intense in more than five years.

“The terrorists warned that the elections will not take place and they threatened the Iraqi people who challenged them back,” al-Maliki said after casting his vote. “They launched attacks and many Iraqis were martyred, but our people didn’t stop going to cast the ballots.”

He urged all voters to cast their ballots to send a message to doubters.

“We expect unprecedented turnout so we can move Iraq ahead in the political and democratic process,” he said.

One of the attacks Wednesday came in Khanaqin, about 18 miles northeast of Baghdad, where three died and dozens were wounded when a suicide bomber targeted a polling station, security sources told CNN.

And in Al-Diblis, near the northern city of Kirkuk, two women were killed by a roadside bomb while heading to their neighborhood polling station, according to security sources.

Soldiers and police also came under attack Tuesday while they voted ahead of the parliamentary elections.

Dressed in police and army uniforms, the suicide bombers placed themselves among the security officials lined up to cast their ballots.

The officials charged with protecting polling stations and voters on Election Day came under attack themselves as the militants detonated explosives, killing and injuring dozens of people across the country.

In an apparent attempt to derail the balloting process and discourage the rest of Iraq’s 21.5 million registered voters from going to the polls, suicide bombers struck several polling stations as well as other locations in a wave of attacks in Baghdad and northern Iraq on Monday and Tuesday.

With a surge in car bombings, assassinations and suicide attacks, the vote — the fourth national election since the fall of longtime leader Saddam Hussein in 2003 — is being held amid rapidly growing violence reaching levels not seen in more than five years.

Across villages and cities in the shattered nation, the echoing deep boom of explosions has become all too familiar for Iraqis.

“We depend on God each time we leave the house, because you don’t know what fate holds for you,” one man said.

Shootings and explosions across the country on Monday killed 53 people and wounded more than 100 others.

In addition to the targeted polling stations, a suicide attacker killed at least 18 people and wounded 33 others at a Kurdish political gathering in the town of Khanaqin, 160 kilometers (100 miles) northeast of Baghdad.

The Kurds were celebrating the television appearance of Iraqi President Jalal Talabani, a Kurd incapacitated since late 2012, who cast his vote in Germany where he was undergoing medical treatment.

On Tuesday, at least 12 people were killed when twin roadside bombs exploded in a busy outdoor market in al-Saadiya, northeast of Baghdad.

Iraq has tightened security measures ahead of the elections, banning vehicles from the streets on Tuesday night and closing roads in and out of the capital.

But on the eve of the polls, the country is fast returning to the horrors of its recent past.

Security forces are at war with an al Qaeda offshoot, the Islamic State of Iraq and Syria, known as ISIS, in western Anbar province and other areas encircling the capital.

Iraq has been beset with political and sectarian violence for months, often pitting Sunnis — a minority in Iraq — against Shiite Muslims, who came to dominate the government after Saddam Hussein was overthrown in 2003.

The United Nations said 2013 was the deadliest year in Iraq since 2008, with more than 8,800 people killed, most of them civilians.

Tensions continue to be fueled by widespread discontent among the Sunnis, who say they are marginalized by the Shiite-led government and unfairly targeted by heavy-handed security tactics.

Sunni anger has made it easier for al Qaeda-linked militants to recruit and operate while eroding the public’s cooperation with security forces. Violence flared just a few months ago because of the arrest of a Sunni lawmaker in Anbar’s capital, Ramadi, and the dismantling of protest sites by the army in Falluja and Ramadi.

Iraq’s security forces, trained by the United States at a cost of billions of dollars, have been unable to dislodge the militants and instead are fighting pitched battles.

The sectarian conflict has also been exacerbated by the war in Syria, which borders Anbar. Sunni militants in Iraq have collaborated with their co-religionists who are fighting to oust President Bashar al-Assad.

Other endemic problems gripping the country include high unemployment levels, dilapidated infrastructure and services, and chronic corruption. Oil revenues have failed to improve the lives of most Iraqis.

The dire security situation in which the elections are going ahead is reminiscent of the country’s first post-Hussein elections in 2005, when threats from al Qaeda insurgents led to minimal turnouts in most Sunni provinces.

ISIS, which wants a Sunni Muslim caliphate, has threatened Sunni Iraqis with death if they vote.

Al-Maliki, whose State of Law alliance is seen as a front-runner, on Tuesday called on Iraqis to take part in the vote.

“Your presence and your insistence to exercise your legitimate national and historical right represents a real response to the terrorists and sectarianism and those who stand behind them,” he said in a statement.

Some 277 political entities across Iraq will compete for 328 seats of the Iraqi Council of Representatives, the country’s parliament. There are 9,032 candidates.

The voting has been canceled in parts of Anbar province, controlled by jihadists and tribesmen.

This time, though, there are no U.S. forces on the ground, and Washington will be watching from afar.