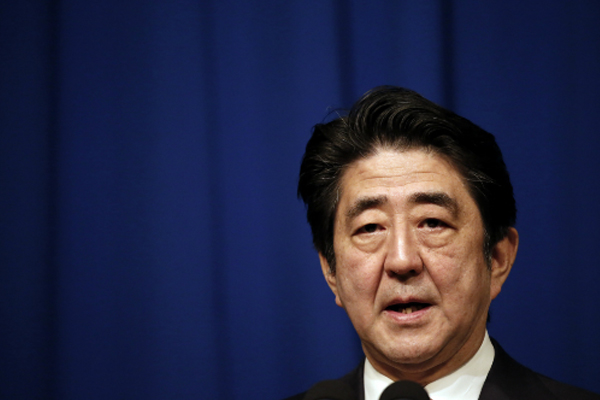 IS threatens to kill Japan hostages, Tokyo vows not to give in

Beirut, Lebanon (AFP) — The Islamic State group threatened to kill two Japanese hostages unless it receives a $200 million ransom within 72 hours, but Tokyo vowed Tuesday it would not give in to “terrorism”.

Japanese Prime Minister Shinzo Abe, who was in Jerusalem on the latest leg of a Middle East tour, demanded that the jihadists immediately free the two hostages unharmed.

He was to fly home after an early afternoon summit with Palestinian president Mahmud Abbas to take charge of the crisis, cutting short the rest of his tour.

IS has murdered five Western hostages since August last year, but it is the first time that the extremist group — which has seized swathes of Syria and neighbouring Iraq — has threatened Japanese captives.

In footage posted on jihadist websites, a black-clad militant brandishing a knife addresses the camera in English, standing between hostages Kenji Goto and Haruna Yukawa who are wearing orange jumpsuits.

“You now have 72 hours to pressure your government into making a wise decision by paying the $200 million to save the lives of your citizens,” he says.

The militant says that the ransom demand is to compensate for non-military aid that the Japanese prime minister pledged to support countries affected by IS violence at the start of his Middle East tour.

But Abe said Japan would not bow to extremism and pledged to honour his promise of aid to IS-hit countries.

“I strongly demand that they not be harmed and that they be immediately released,” he told a news conference in Jerusalem.

“The international community will not give in to terrorism and we have to make sure that we work together.”

Abe said the aid he had promised in Cairo on Saturday was to help the displaced and those made homeless by the conflict in Iraq and Syria.

“This posture will not change at all,” he said.

Abe pledged a total of $2.5 billion in humanitarian and development aid for the Middle East.

He promised $200 million in non-military assistance for countries affected by IS’s bloody expansion in Iraq and Syria, which spurred an exodus of refugees to neighbouring countries.

Since August, IS has murdered three Americans and two Britons, posting grisly video footage of their executions.