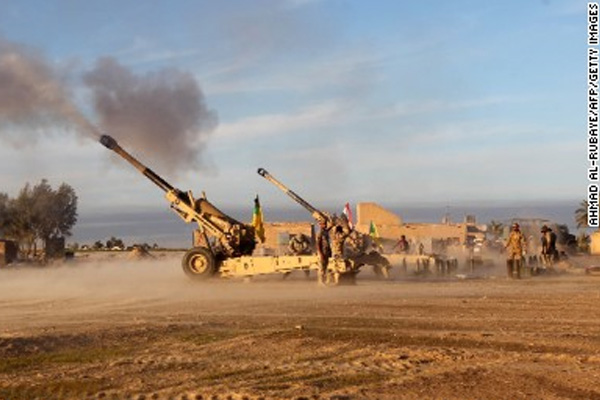 ISIS blows up Iraqi army HQ in battle for Ramadi

Baghdad, Iraq (CNN)– More than 40 Iraqi soldiers were killed when ISIS blew up the Iraqi army headquarters near Ramadi in Iraq’s western Anbar province, an Anbar provincial leader told CNN, as the battle continues for control of key cities in Iraq.

Ramadi has been the focus of a fierce ISIS assault since Wednesday, launched at the same time as Iraqi forces made gains against the Sunni extremist group in an offensive in Tikrit, about 100 miles to the north.

ISIS fighters in Ramadi dug a tunnel underneath the army headquarters and detonated hundreds of homemade bombs, Sabah Al-Karhout, the head of the Anbar Provincial Council, said Thursday. The headquarters are located in the Albu Diab area, just 4 kilometers (2.5 miles) north of Ramadi.

Al-Karhout also denied reports that the U.S.-led coalition had bombed the headquarters.

A statement released early Friday by the U.S.-led coalition against ISIS said the Iraqi security forces had successfully repelled the ISIS attack on Ramadi, despite coming under attack from several directions on Wednesday.

“The successful defense of Ramadi by Iraqi Security Forces is another example of their increasing ability to defeat Daesh in multiple locations and prevent the terrorist group from gaining ground,” said Lt. Gen. James L. Terry, the coalition force’s commander, using another name for ISIS.

“The ISF continues to hold terrain in some locations while making gains in others.”

He spoke of the coalition’s use of fighter jets, heavy artillery and tanks, saying it is a “nightmare and will go eventually.”

Faleh al-Issawi, the deputy head of the Anbar council, said Wednesday that officials believe the Ramadi assault “is an ISIS response to the Tikrit operation that is ongoing in the north.”

On Thursday, the head of a key paramilitary force taking part in the Tikrit offensive told CNN that about 75% of the besieged city was now back in government control.

The other 25% is in the hands of about 150 ISIS fighters who continue to hold out, said Main Al-Kadhimi, commander of the Hashd Al-Shaabi militia.

There has been no independent confirmation of such a significant advance by the Iraqi forces. But they have been making progress in recent days.

On Wednesday, joint Iraqi forces gained control of Tikrit Military Hospital, a few blocks south of the presidential palace. It’s part of their ongoing quest to wrest control from ISIS, which captured the city last year.

The predominantly Shiite militia has been working with Iraqi troops as well as Sunni fighters to try to regain Tikrit.

Tikrit, best known to Westerners as the birthplace of former Iraqi dictator Saddam Hussein, fell in June to ISIS, which has captured large areas of Iraq and Syria for what it says is its Islamic caliphate.

There have been several failed attempts to recapture Tikrit since the second half of 2014. If Iraq regains control of the city, it could mean that retaking Mosul — a city 10 times bigger — is possible.

The Tikrit offensive involves around 30,000 fighters.