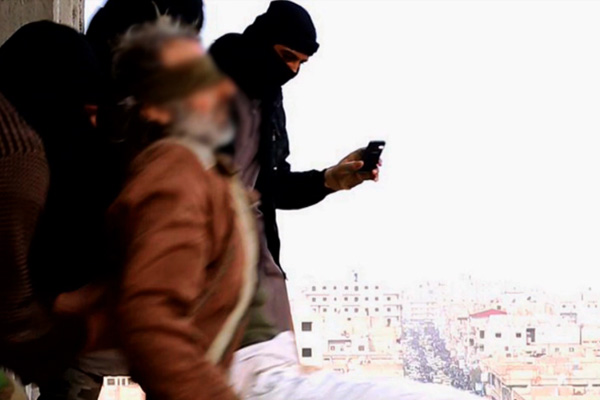 (CNN)– The Islamic State of Iraq and Syria is making headlines again. On Wednesday, images began circulating from the city of Raqqa in Syria of a man being thrown off a building, allegedly after a conviction for a homosexual act.

The scene is sickening and horrifying. And it’s meant to be, because ISIS is not only killing individuals it accuses of homosexuality — it is trying to spread terror among people who do not conform to traditional ideas about what women and men should look like, do, or say.

This latest execution is the eighth that ISIS has claimed it carried out for sodomy. In addition, the Syrian Observatory for Human Rights (SOHR) has reported the murders of four more men, also accused of sodomy, who were killed in similar style by ISIS in Syria. ISIS is allegedly also responsible for stoning at least three women in Syria accused of adultery.

It’s clear that these chilling spectacles are staged with the intent to terrorize. Some of the men were photographed either being thrown from the tops of tall buildings or stoned or shot to death (and in some cases both). In its social media postings about the executions, ISIS shows victims being brought to a city center, with militants purporting to read from a self-styled “court” ruling before conducting the execution in front of a crowd. A final picture usually depicts a lifeless body.

The militia’s propaganda machine gathers local communities and posts images on social media with a clear intention: to warn against any kind of transgression and spread terror.

The International Gay and Lesbian Human Rights Commission (IGLHRC), of course, condemns these acts. But it is also important to note that we have very little information on the executions themselves. Indeed, despite our efforts, and those of other independent observers, neither the accusations nor the exact nature, time, and location of the executions can be corroborated. We know nothing about the victims’ sexual orientation or gender identity. Without evidence or independent confirmation, we must therefore be cautious about assuming anything about the individuals involved.

Still, whatever the uncertainties in these individual cases, as IGLHRC and the women’s rights organization MADRE have asserted, the public and gruesome nature of these executions, and ISIS’s previous threats against those who commit what they deem to be “sodomy,” raise concerns for anyone in Iraq or Syria who does not conform to traditional ideas about “proper” women and men.

And the reality is that these most recent executions are certain to heighten alarm and psychological suffering among lesbian, gay, bisexual, transgender and intersex individuals — and indeed terrorize the population generally — in the areas under ISIS’s control. For Iraqi individuals who are perceived to deviate from prevailing gender norms, living under the rule of ISIS means living with the constant shadow of a potential death sentence, as pointed out in our report with MADRE and the Baghdad-based Organization of Women’s Freedom in Iraq.

Where do we go from here?

There are no shortcuts or easy answers to stopping the violence of ISIS. The antidote to their bleak worldview will be long-term and hard-won, rooted in the tenacity and wisdom of resilient local communities. However, the international community must act urgently to protect lives and help those fleeing violence today. Internal and external resettlement of persecuted people should be stepped up with greater financial support to U.N. agencies and human rights NGOs who work directly with vulnerable people. Meanwhile, applications for asylum by persecuted individuals should be expedited.

We cannot sit idly by while ISIS commits wanton violence in the name of protecting “morality.”