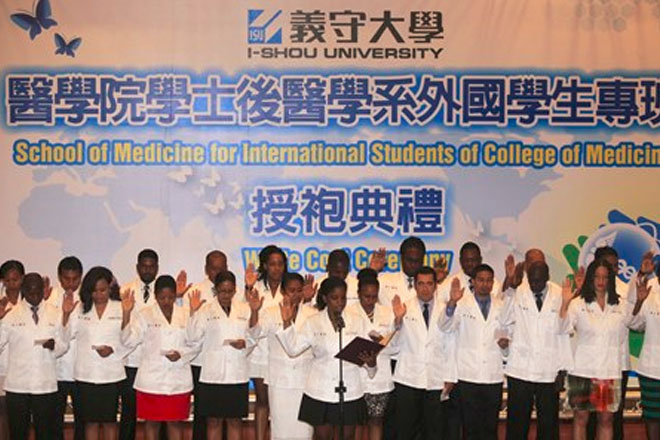 The two-year classroom-based course prepares participants to undertake second-stage practicums of the same duration at ISU-affiliated E-da Hospital. Upon finishing the four-year program, graduates are qualified to serve as doctors in their home countries.

At a ceremony in which the students were presented with honorary white doctors’ coats, President Ma Ying-jeou praised the ISU initiative for promoting bilateral ties with ROC allies and enhancing the well-being of the peoples of these nations.

“The project stems from my visit to Africa in April 2012 where I saw firsthand the need for ROC medical missions to be supplemented with additional frontline personnel,” Ma said. “In addition to providing medical supplies, pharmaceuticals and public health-related training, talent cultivation is another important component of this undertaking.”

More than 600 officials, students and foreign dignitaries based in Taiwan, including those from ROC allies El Salvador, Guatemala, Haiti, Marshall Islands, Palau, Solomon Islands, St. Christopher and Nevis, as well as Swaziland, attended the ceremony.

One of the students, Ayanda Dalmini from Swaziland, said she is excited about the prospect of becoming one of only a handful of female doctors in her country. “Most of the doctoring is conducted by foreign males,” she said, adding that Swaziland is yet to establish a school of medicine.

Similarly enthusiastic is Ava Maurice from St. Lucia, who said financial difficulties made it impossible for her to pursue a lifelong dream of working as a doctor. “I am extremely grateful for this special opportunity to study in Taiwan on an ROC government scholarship.”

Since beginning in 2013, the ISU program has admitted 108 students from 17 countries. (SFC-JSM)