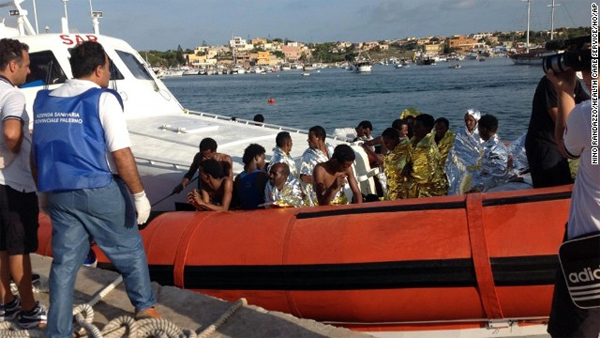 News of the rescue operations came as European Union leaders were meeting in Brussels, Belgium, for a summit at which the issue of migration was high on the agenda.

The deaths of more than 300 African migrants in a shipwreck off Lampedusa on October 3 shocked Italy and the world, and led to calls for EU lawmakers to review their migration policies.

The European Council meeting was largely overshadowed by controversy over claims the United States has been spying on its European allies.

But in a statement of its conclusions, the EU leaders expressed “deep sadness” over the recent migrant deaths in the Mediterranean and pledged action to tackle the issue.

“Based on the imperative of prevention and protection and guided by the principle of solidarity and fair sharing of responsibility, determined action should be taken in order to prevent the loss of lives at sea and to avoid that such human tragedies happen again,” it said.

The EU leaders said they would work with migrants’ countries of origin and international organizations such as the U.N. refugee agency to try to address the root causes of migration.

They also called for “the fight against trafficking and smuggling of human beings to be stepped up” in the European Union and countries that migrants originate from or pass through.

The European Union is setting up a new border surveillance system and Mediterranean task force to bolster its efforts and will review its asylum immigration policies next summer, it said.