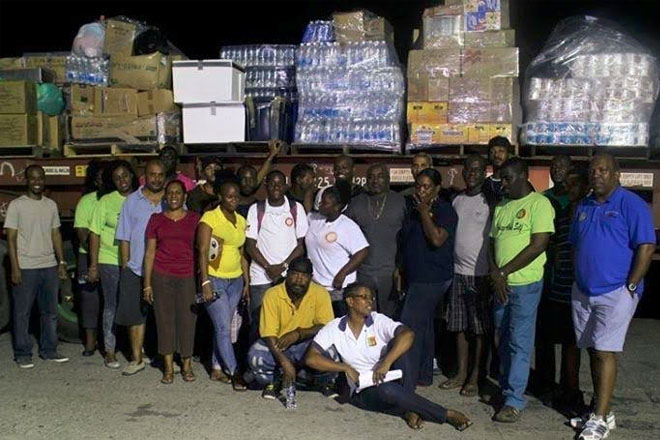 Basseterre, St Kitts; 3 September 2015: When the clarion call went out from the Rotary Club of Liamuiga (RCL) requesting support for our sister islanders in dire need, the Whatsapp and email groups of the Jamaican Kittitian (JamKit) Association lit up with messages being circulated about the planned exercise for Saturday, 29 August 2015. Pictures of storm-struck Dominica had been received by various members of the group and circulated the previous day so the group was ‘ripe’ for action.

The Jamaican Kittitian (JamKit) Association, the association of Jamaicans and friends of Jamaicans living in the Federation of St Kitts & Nevis, banded together its members and associates who were available and did a few pickups and delivery of items to the St Kitts Sea Port and later a team from the Association joined in the packing and labeling of the cargo bound for Dominica that very night.

JamKit joined hands with the members of the Rotary Club of Liamuiga, the Rotary Club of St Kitts, the Rotaract Club of St Kitts, the Red Cross Society, the Dominican Association of St Kitts and other volunteers, strongly supported by several managers and staff of the St Christopher Air and Sea Ports Authority (SCASPA), on the ground at the Port to sort, pack, label, palletize, de-palletise and individually label (as necessary), ask questions about whether more items should be de-palletised upon loading onto the boat, with a few monitoring and assisting as necessary the experienced dock workers as the MV Miss Abigail was loaded, and being on hand to see her set sail at nearly3.00am on Sunday morning, 30 August 2015.

The JamKit Association joins the Rotary Clubs in expressing deepest appreciation to ALL the companies and individuals on Nevis and St Kitts who contributed, whether large or small, to the items and to the packing exercise to get these much needed items off to Dominica in a timely fashion.

Special mention must be made of young Cassandra Boon, a teenager, who told the JamKit President, who is also a member of the RCL, that she had never heard of people helping others in this way and so this moved her to contribute when she heard the call on the radio! Miss Boon went to Ram’s Supermarket and bought some canned goods and all that she asked of the RCL was for someone to pick them up from her, as she had no transport and the box was heavy, so that she could help Dominicans. Special mention must also be made of Wilhelmina Irish whose call was fielded by the JamKit President in which she advised that she was sending some non-perishable items down to the Port but was waiting on the establishment of a bank account so that she could also contribute in that way. These are just two (2) examples that bear witness to the fact that the humanitarian spirit is NOT dead in our Caribbean Region!

The SCASPA management and staff at various levels and across various specializations facilitated the packing of goods and the loading of the boat, according to required shipping standards within the Federation, with personnel and equipment in every which way possible and must be thanked wholeheartedly! Complimentary use of a specialized crane and appropriate experienced staff afforded by I & B Limited in a last minute call from the President of the RCL must also be highly commended.

The members and associates of the JamKit Association were happy to have been afforded the opportunity to help Dominicans in this way and lift their hats to President Tuffida Stewart, of the Rotary Club of Liamuiga, who, from her sick bed, pushed the idea of immediate help for Dominicans and galvanized a whole nation into action!

Others who are still interested in assisting Dominicans should note that there is a container that is being loaded daily between 4.30pm and 6.00pm for the remainder of this week at the St Kitts Sea Port. Items are being sorted by the local Dominican Association members and shipment will be facilitated by S L Horsford & Company. Also, the Rotary Clubs in the Federation of St Kitts & Nevis have opened a special bank account at Bank of Nova Scotia in which monetary contributions can be deposited. TheRotary Dominica Relief Fund account number is 51544193.

One love in the heart of the Caribbean people for Dominica!