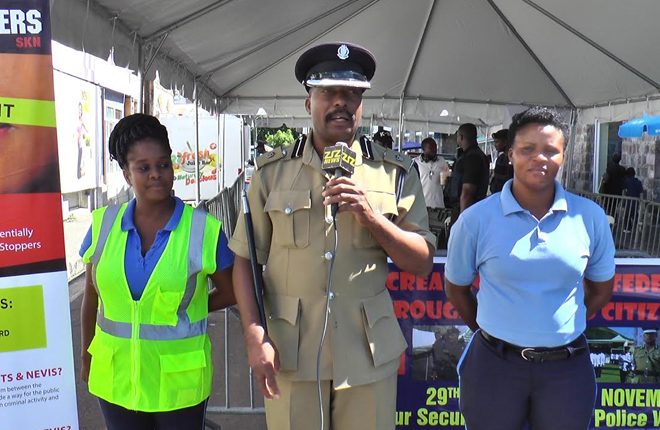 (ZIZ News) — As the Police Week of Activities continues, the Police Force hosted a Job Fair at Central Street, on Friday.

The Police Force is seeking to boost enrolment and build stronger relationships with persons in the communities through public interaction at this week’s Job Fair.

Superintendent of the Service Improvement Directorate, Lyndon David gave ZIZ a tour of the job fair.

He also used the opportunity to encourage citizens to join the police force to assist in the fight against crime.

“We want you to be a part of our Police Force to ensure that our country is safer and we have the application forms. We also have some information pertaining to how one can become a police officer. We have the requirements and more information about the Force. We want to thank all persons who have been supporting the Force, those who have assisted in the past. For those persons who are assisting now, we encourage you to continue to do so”, he said.

“The K-9 Unit is a branch that falls within the SSU and the Drug Squad and we have several dogs with different capabilities for drugs, firearms, explosives or for tracking persons. Our dogs are well trained and they are a necessary tool to enhance policing efforts”, Superintendent Rogers explained.

“We have seen in Antigua where the crime rate and the detection rate went from about 10% to over 80% when persons began to use Crime Stoppers. We encourage you to use Crime Stoppers, call crime stoppers and report crime. We have to make this Federation a safe place to live, work and to do business” ACP Hughes expressed.

There were also multiple stalls that gave demonstrations on finger printing techniques, the various uniforms and hats worn by officers based on ranks along with other areas of forensics and crime-fighting technology.

The activities end on Saturday with a closing ceremony and Sports Day at the Kim Collins Stadium at 1 pm.