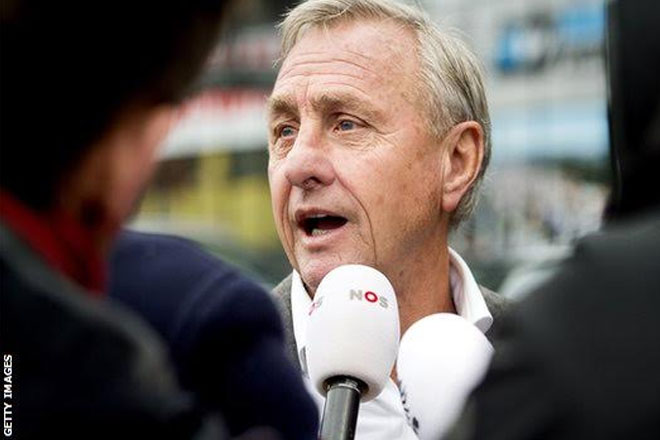 The 68-year-old former Ajax player was told of his illness this week after undergoing tests.

Cruyff, a three-time Ballon d’Or winner, helped his country reach the World Cup final in 1974, where they lost to West Germany.

He also won three consecutive European Cups with Ajax and went on to play and manage at Barcelona, with both clubs sending out messages of support.

Former Ajax, Manchester United, Juventus and Fulham goalkeeper Edwin van der Sar, now a director at the Dutch club, said: “On behalf of the club, I wish Johan and his family a lot of strength and a speedy recovery.”

Barcelona president Josep Maria Bartomeu tweeted: “Johan, you’ll win this one too. The whole club is behind you.”

While in charge at the Spanish club, he led them to their first European Cup win in 1992 and the European Cup Winners’ Cup in 1989.

Widely regarded as one of the greatest players of all time, Cruyff had a double heart bypass surgery in 1991.

Having been a smoker, he gave up immediately after the operation and took to sucking lollipops in the dugout.

He featured in a Catalan health department advert, saying: “Football has given me everything in life, tobacco almost took it all away.”

His last managerial appointment came at the Catalonia national team, where he was in charge from 2009 to 2013.