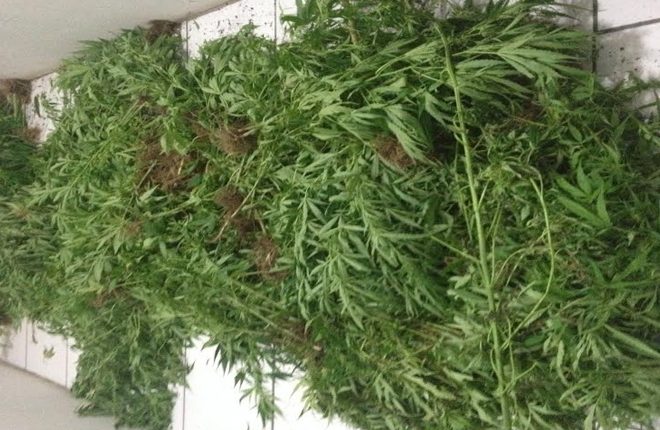 (PRESS RELEASE) Today Wednesday, 1 March 2017 at about 10:30am, while on a routine joint security patrol between the Royal St Christopher and Nevis Police Force and the St Kitts Nevis Defence Force in the Old Road area, the security personnel on the patrol discovered a small patch of Marijuana plantation within 10- 20 meters of dwelling homes less than 300 meters from the Old Road Police Station in the Hermitage Estate area in a patch of land slightly over grown.

The security personnel proceeded to up root the marijuana plants when shots were fired at them. As the soldiers and police officer sought cover from the gun shots, they saw some individuals running away from the vicinity of the direction gun shots were fired. The armed soldiers were prudent in their action by sticking to the rules of engagement of the SKNDF thereby not returning fire because of the imminent danger of an innocent person getting hurt due to the presence of dwelling houses in the environment.

As a result of this occurrence, the security forces will step up Urban operations in order to arrest such criminal activities taken place in close proximity to dwelling homes where children, women and the elderly reside and traverse and risk the possibility of getting hurt in gang related activities. Villages and towns will be actively patrolled in conjunction with on going eradication operations in the hills.

To this end, the security forces appeal to all citizens who maybe inconvenienced during the execution of the series of security operations, to bear with the security force as they engage in intensive targeted security operations to raid the communities of criminalities. The criminals are becoming too daring and bringing their criminal activities closer and closer to dwelling homes where children and elders reside without any regard or respect, we are committed in our ongoing effort to stop them in their tracks. Hence the security forces appeal to everyone to continue to cooperate and support the security apparatus of the nation. Together we will succeed in making our communities and streets safer.

The street value of the marijuana discovered and uprooted in today’s operation is about EC$ 86,400.