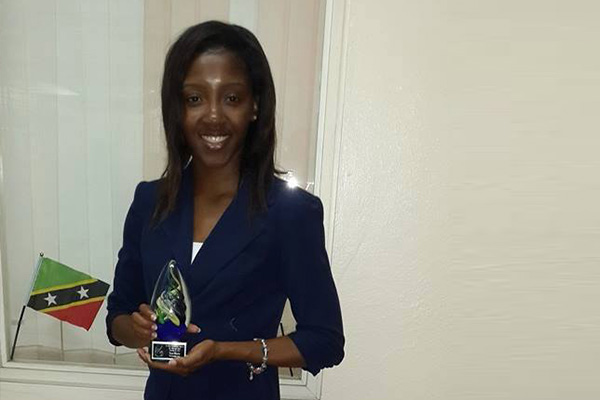 Joint State Scholars named after most keenly contested competition ever

(CUOPM) – After what has been described as the most keenly contested competition ever, four students of the Clarence Fitzroy Bryant College (CFBC), have obtained Grade One passes in all seven qualifying units.

Two have been named joint winners of the State Scholarship for 2013 and the other two, runners up.

Ms. Martin gained seven (7) Grades I passesfrom seven qualifying units: Communication Studies, Economics Units1 and 2, Management of Business Units 1 and 2 and Spanish Units 1 and 2. She obtained 15 A’s, 5 B’s and one C, and the highest T-Score.

Mr. Bradshaw gained seven (7) Grade I passes from seven qualifying units: Communication Studies, Biology Units1 and 2, Chemistry Units 1 and 2 and Pure Mathematics Units 1 and 2. He obtained the best combination of grades in his module profiles with 18 A’s, 3 B’s and no C’s.

Mr. Frank obtained seven (7) Grade I passes from seven (7) qualifying units:  Communication Studies, Biology Units1 and 2, Chemistry Units 1 and 2 and Pure Mathematics Units 1and 2 and has received the designation of Second Runner-up State Scholar. He obtained 15 A’s, 5 B’s and one C in his unit module profiles.

According to the Post Cabinet Briefing, the contenders for the State Scholarship are assessed on the basis of their performance in seven (7) qualifying units and then other criteria in the event of a tie.

“This year, in the most keenly contested competition ever, there were four (4) students who all obtained Grade One passes in all seven qualifying units, and based on the criteria of the module profile performance (which assesses the number of A’s, B’s and C’s in the unit or subject profiles) and the T-score, a raw numerical score calculated by the Caribbean Examinations Council (CXC), the rank order for 2013 is as follows:

Each year, the student of the Clarence Fitzroy Bryant College, and before that, the Sixth Form of the Basseterre High School, with the best results at Advanced level examinations (or A’ Level) receives the State Scholarship.

The winner of this scholarship receives an annual contribution of EC$25,000 for each year of their university studies. Similarly, the second Runner-Up State Scholar receives EC$14,000 per year. Additionally, the private sector, through the Chamber of Industry and Commerce (CIC) makes a one-time monetary award of EC$7000 to Runner-Up State Scholar.

The Ministry of Education and Information, and the Government of St. Kitts and Nevis hereby extends congratulations to Tama Martin, Levi Bradshaw, Julear Hobson, Deros Frank and their parents, as well as the Management and staff of the Clarence Fitzroy Bryant College on their outstanding achievement. Best wishes are extended to these finest of our nation’s scholars.