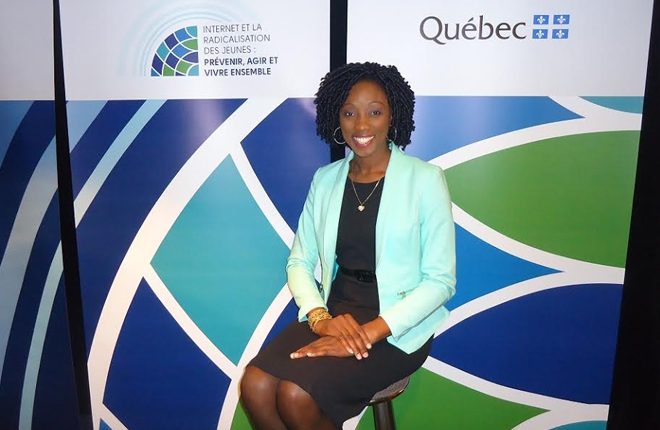 (SKNIS) -Former CARICOM Youth Ambassador and local youth advocate, Miss Sonia Boddie, recently travelled to Quebec, Canada, at the invitation of the United Nations Educational, Scientific and Cultural Organization (UNESCO), where she served as a panellist at the Quebec-UNESCO Conference on “Internet and the Radicalization of Youth: Preventing, Acting and Living Together.”

Miss Boddie, alongside panellists from Denmark, Uruguay, Ireland, Niger, Canada and UNESCO, discussed the theme, “Youth, Internet and the Prevention of Radicalization Leading to Violence: A look on Field Initiatives”. The panel discussed initiatives from different regions, which sought to provide solutions to the challenges faced by young people. These solutions were crafted with the aim of minimizing the youths’ interest in becoming radicalized through the internet.

Miss Boddie noted that she used the opportunity to highlight that “a lack of opportunities for socio-economic upward mobility for young people would more than likely leave young people susceptible to seeking alternatives through unacceptable avenues, which can include becoming radicalized via the internet.” She praised CARICOM’s Creativity for Employment and Business Opportunity (CEBO) training programme initiative, which serves to inspire and motivate entrepreneurial interest among young people as a great initiative that should be emulated in other parts of the world. She also noted that the recent introduction of the CAPE Entrepreneurship course at the local community college in St. Kitts, plus other locally organized activities to promote entrepreneurship are important. These initiatives will help to reshape the way young people think about economic advancement, as they will think of themselves not as “job seekers”, which create great dependency, but as potential “job creators.”

In discussing these issues, Miss Boddie highlighted the importance of Public –Private Partnership (PPP) initiatives which facilitate technical and vocational training, internships and jobs, for young people, noting that “if young people are not gainfully employed, the devil will finds work for idle hands”. Miss Boddie intimated that the youth need to be constantly inundated with positive messages, and that it is important for leaders to leave the comfort of their offices, and go out into the communities and engage with the youth to assess their concerns, and how they can be addressed.

Miss Boddie was the lone Caribbean youth participant at the Quebec-UNESCO conference and one of only two Caribbean participants at the conference. In June 2015, Boddie participated as a delegate at a similar Youth and the Internet Fighting Radicalism and Extremism Conference, organized by UNESCO, at its Paris Headquarters. Miss Boddie is a member of the local UNESCO Youth for Human Rights Committee.