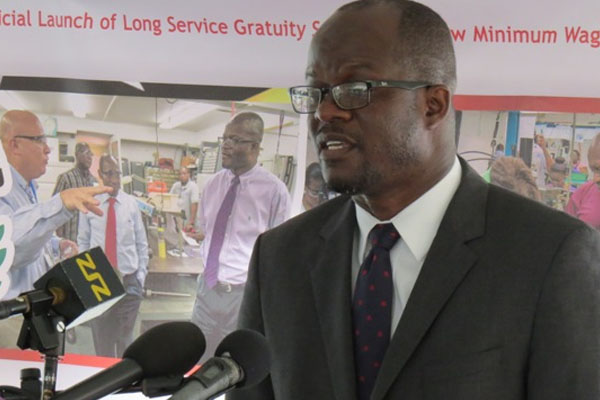 Basseterre, St. Kitts (CUOPM) — The industrial enclave and the development of the hospitality sector in St. Kitts and Nevis have been the brainchild of a previous Labour Governments and both sectors as others in the economy are representative of the multifaceted and multidimensional vision of the present Labour administration.

Minister of Labour, the Hon. Patrice Nisbett speaking at a ceremony to officially launch the implementation of the New National Minimum Wage and the Long Service Gratuity Scheme pointed to the positive reports on the St. Kitts and Nevis economy and the profits by local companies and is of the view that it is time to examine the concept of profit sharing to the workers in this Federation.

He said the government’s focus on manufacturing and hospitality sectors is reflective of the Labour Government’s thrust in the interest of all nationals and/or residents to continue the development of the socio economic platform and pillars that accentuates the economic strategy, vision and legacy of your Government.

“Indeed history reveals that in the manufacturing and industrial sphere, the St. Kitts Bottling Company is over 50 years old, Harowe Servo Controls (St. Kitts) Ltd is over 40 years old, Electrofab is about 40 years and others within this industrial space range between 20 – 30 plus years,” said Mr. Nisbett, boasting that they are visible evidence of a most commendable record of sustainability and growth.

He added that it is no surprise therefore that the Federation of St. Kitts and Nevis is at the apex with respect to manufacturing within the OECS Region.

“In the Hospitality Sector one can proudly point to the former Fairview Inn now the Fairview Great House and Nirvana Restaurant. The former Golden Lemon Hotel, the Jack Tar Village Resort, and of more recent vintage, the Marriott Resort, the Kittitian Hill Project, Christophe Harbour Development, in addition to the soon to be realized Park Hyatt, KOI Resort and the list goes on. Not forgetting the hospitality sector over on the sister Island on Nevis, I speak specifically of the Golden Rock Hotel, Nisbett Plantation Inn, Montpelier Plantation Inn, The Hermitage Inn, The Four Seasons Resort, Oualie Beach Resort and other hospitality entities that today have made St. Kitts and Nevis the destination of choice for discerning travelers,” .

Minister Nisbett, who also holds the portfolios of Foreign Affairs, Homeland Security, Justice and Legal Affairs, said he is humbled to be serving at Minister with responsibility for Labour.

“Others (Hon. Sam Condor and Hon. Dwyer Astaphan) before me paid lip service to the value of Labour to the development of this Federation without appreciating the importance of implementing government’s policy agenda,” said Minister Nisbett, adding:

“I remind us that it is Labour, the Labour Government, Labour as in the sweat and skills of the working man and women that continues to propel the Nation ever upward. I believe that I am correct and justified in noting that – without labour, there is no work, and no work without labour. These are the main ingredients that go into the mix to create the wealth of Nations and those of you who have eyes to see and ears to hear you are witnessing the systematic and responsible transformation of a Nation generating wealth.”

He said one only has to read the reports of the International Monetary Fund (IMF), that of the Eastern Caribbean Central Bank, those produced by the telecommunication entities, namely, Digicel and LIME.

“How can we not mention those of the major business establishments operating in St. Kitts and Nevis? There is one recurring theme in all of those reports- they record the enormous profits that have been generated in the Federation of St. Kitts and Nevis. It is not the Government which has produced those reports, we cannot therefore be accused of doctoring the contents,” said Minister Nisbett.

“With all of this profit been generated through the hard work and dedication of our working population that our private sector partners must begin to examine the concept of profit sharing to the workers in this Federation,” said Minister Nisbett.

Rotary Club Of Liamuiga Donates Thermometers To The Ministry Of Education