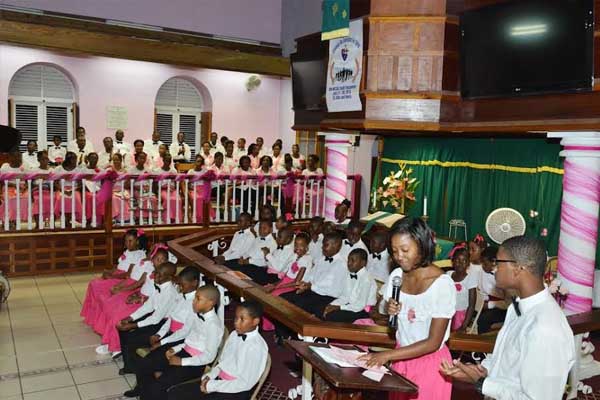 Basseterre, St. Kitts — The Wesley Methodist Church in Basseterre was abuzz with excitement on the evening of Tuesday, July 15th as the packed auditorium prepared to experience an outstanding evening of music. The occasion was the Thirty-Third Annual Pianoforte Concert of The Lawrence School of Music under the leadership of Founder Lady Hulda Lawrence, who has significantly impacted the lives of hundreds in the Federation through her music instruction for over three decades.

With His Excellency, the Governor General, Sir Edmund Lawrence in attendance, this year’s concert was ably hosted by past students of the Lawrence School of Music, Ms Tama Martin and Mr Kyle Bradshaw who also happen to be the Joint State Scholars. The evening began with the traditional Processional March of students decked out in signature pink, white and black. Once the students had taken their places, they performed their beautiful theme song, “Music” which has been sung since its composition in 1987 by Lady Hulda. Rev Joyce Rohan offered the opening prayer and after welcome remarks by the Chair, the program got underway.

The audience was treated to an interesting mix of pieces for piano, piano and violin, instrumentals and group and solo vocal renditions. The programme began with a piano solo by Britney Boncamper doing Purcell’s “Hornpipe”, and ended with a group song entitled “Great is the Lord” composed by Lady Hulda and taken from Psalm 48:1-2. Special commendation must be given to the very young students who performed their pieces well and sang their group songs such as “Five Barley Loaves” and “The Man of Galilee” with joyful gusto. “By the Rivers of Babylon” was one of the bright rhythmic instrumental selections that added variety to the programme, and this was performed by Christian Nathaniel, Kayla Farrell, Ciaran Phillip and Alkronus Bridgewater on fife, clarinet and drum. Also, to the delight of the audience, Drs Louisa, Caroline and Taresa Lawrence tag-teamed to perform Rubinstein’s Melody in F for Violin and Piano.

Christian Nathaniel’s solo piece in tribute to his grandparents mixed the old and the new beginning with “Pavane Opus 50” by Faure, then he had the audience rocking as he wrapped it up with the popular disco hit “I Will Survive”. Kyle Bradshaw also mixed the old and the new by beginning with Beethoven’s Fur Elise and ending with a cover of John Legend’s well-known recent hit “All of Me”, which had the audience humming along happily once again. Tama Martin, who successfully sat Grade 8 piano practical exam, performed an excellent rendition of one of her Grade 8 pieces – Beethoven’s “Allegro Molto e Con Brio”.

All the group songs were very well received by the audience and it must be noted that the arrangements and compositions of these pieces were Lady Hulda’s. A special tribute to past student Thencia Grey, “All Things Work Together for Good” was composed especially for this occasion and the audience joined in the emotional chorus in her remembrance. Dr Elizabeth Lawrence’s two lovely operatic renditions by Puccini, and the soul-stirring duet “He Lives in You” performed by Jewel Wattley and Konris Maynard were the icing on the cake.

The programme concluded with the distribution of certificates for students who sat Royal Schools of Music Exams, and awards for those with outstanding results and performances during the year. Parent Mrs Rondalyn Bradshaw distributed the awards to the proud students.

The Lawrence school of Music takes this opportunity to commend all the parents and students who work tirelessly to accomplish their musical goals. Heartfelt appreciation is extended to the former students, the concert committee, Wesley Methodist Church, concert-goers and all those who assisted in making this edition of The Concert a grand event.