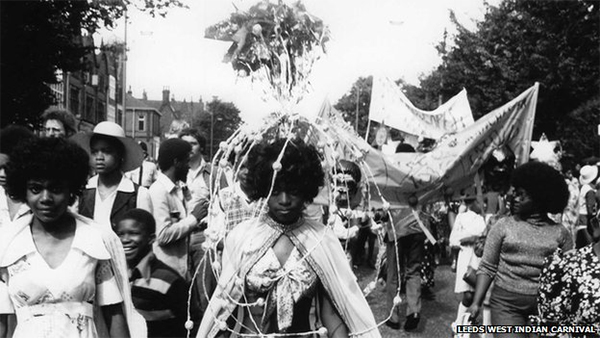 Basseterre, St. Kitts (CUOPM) – The streets of Leeds will be awash with the sights, sounds and scents of the West Indies on Monday, but how did carnival spirit make the journey from the sun-drenched islands of the Caribbean to the cooler climes of Chapeltown?

According to Oliver Wright and Abigail Jaiyeola writing for BBC News in Yorkshire, when Arthur France arrived in West Yorkshire in 1957 he quickly found himself longing for his home in the Caribbean nation of St Kitts and Nevis.

But, as the homesickness set in he resolved to cure his melancholia by bringing the carnival spirit of his birthplace to the grey streets of Leeds.

“When we came here, we came from different parts of the Caribbean and, apart from the cold, we had nothing to hold on to,” Mr. France said.

“We needed something that would bring us together.”

In 1964, he gathered 27 friends together in his cramped bedsit and outlined his grand plan.

“Most of the people thought I was crazy,” he said, “They said ‘A carnival in England? You’re mad’.”

But, in 1967 that plan became a reality and the first Leeds West Indian Carnival took place.

Now, 47 years later, the event which is held annually on the streets of Chapeltown and Harehills attracts up to 150,000 and is estimated to bring in as much as £10 million to the local economy.

Mr. France, who remains at the helm of the organising committee, said ahead of the inaugural parade he bought and plucked a dozen chickens to help make costumes.

He said: “You need feathers to make an Indian costume but they didn’t sell feathers in the shops in England.

“As you know West Indians like chicken and rice for Sunday dinner.

“So, we found people in the community who were buying chicken.

“We went to Otley and bought 12 chickens, then we plucked them and passed them on to people who buy chicken for Sunday dinner.”

In the years that followed the carnival went from strength to strength.

But some would say 1967 marked the pinnacle of its success.

Rex Watley, who played in a steel band at the first carnival said: “I still think the first carnival was the very best one. We had a troupe of Indians and we had a big troupe called the Fallen Angels. I remember that really well.”

Arguments over which year was the best, however, pale into insignificance when compared to the argument about whether Leeds or London’s Notting Hill is home to the oldest Caribbean carnival.

“They were waiting to see how Leeds West Indian Carnival went before they actually started it.”

Max Farrar, who was commissioned by the West Yorkshire Archive Service to write a short history of the carnival, said: “Carnival bands formed one element of the fetes in Notting Hill organised from 1964 onwards, but the Notting Hill Carnival did not become a specifically Caribbean event until the 1970s.”

This year Leeds City Council has said it plans to survey revellers in order to measure the economic impact of the event.

Simon Brereton, from the council, said it is thought the carnival could bring anything between £5 million and £10 million into the Leeds economy.

However, he said: “Carnival was not dreamt up to make money it was dreamt up to have a really good time and to bring the community together and I think we’ve got to recognise that’s the real value of carnival.”

While the issue of whether Leeds or London has the oldest carnival and the amount of money the event generates are of interest to certain groups they both come a distant second to the real purpose of the carnival and the reason for it beginning.

Mr. France said: “We wanted to make sure that we stamped our footprint here and we left something positive for other people.

“I’m very close to my African roots and a part of me that most people might want to forget, that we are African.

“The carnival is a celebration of emancipation.”

Put more simply, in the words of Mrs. Wenham: “Carnival is in our blood.”

BBC Radio Leeds, in partnership with Leeds West Indian Carnival, has commissioned a film about Leeds Carnival which you can view on the station’s Facebook page. Carnival Story was produced and directed by Jonnel Benjamin.