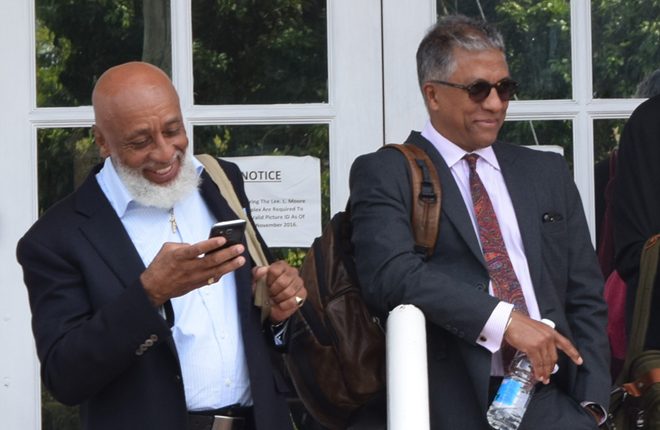 (Press Unit in the Office of the Prime Minister) – The case brought against the Leader of the Opposition, Dr. Denzil Douglas, continued in the High Court today (Thursday, January 10, 2019) with three expert witnesses on Dominican law making presentations before His Lordship Justice Trevor Ward QC to help him determine whether Dr. Douglas, through his use of a diplomatic passport issued by the Commonwealth of Dominica, is under allegiance to a foreign power.

The expert witnesses provided by the Government were Mr. Reginald Armour SC, and Mr. Justin Simon, former Attorney General of Antigua and Barbuda. Both men are Dominican by birth. These witnesses for the claimant attempted to show that Dr. Douglas did indeed demonstrate his allegiance to the Commonwealth of Dominica when he travelled on his Dominican diplomatic passport.

The lone expert provided by the defendant was Attorney-at-Law, Mr. Gerald Burton, also a Dominican.

Dr. Douglas, in an affidavit filed in the High Court Registry on February 21, 2018, admitted to holding a diplomatic passport of the Commonwealth of Dominica (DP 0000462), which he has used to travel. Dr. Douglas also admits to filling out and signing an application form for the diplomatic passport he holds, which is valid until July 29, 2020.

Section 28 (1) of the Constitution of St. Christopher and Nevis and Section Six (6) of the National Assemblies Act both provide that “a person shall not be qualified to be elected or appointed as a member if he is by virtue of his own act under any acknowledgment of allegiance, obedience or adherence to a foreign power or state.”

The defendant, Dr. Douglas, is arguing that he has not sworn an allegiance, taken an oath of allegiance, nor become a citizen of Dominica.

However, the Attorney General’s Chamber is arguing that Dr. Douglas is in violation of Section 28 of the Constitution after filling out an application form for a passport of another country, being issued with said passport and using that passport to travel, which are positive acts that constitute adherence, allegiance and obedience to a foreign power.

Attorney General, the Honourable Vincent Byron, while speaking with the media following today’s hearing, cited the 1945 case of William Joyce—an American citizen with a British passport, who was found guilty of treason against Britain. In that matter, the prosecution argued that the British passport, which Mr. Joyce had renewed immediately prior to fleeing from Britain and which was valid until July 2, 1940, entitled him to the protection afforded to all British passport holders, and that he therefore owed allegiance in return.

The Attorney General said, “The fact that he had used the passport, that in itself showed that he had the protection of the Crown in England and therefore the court determined that that was akin to having an allegiance, and so our case is based on that very strong precedent.”

AG Byron stated that Dr. Douglas has traveled to seven countries at least 10 times using the diplomatic passport of the Commonwealth of Dominica, “and the case is that having used that passport he falls under the protection of Dominica and using the precedent of Joyce in England’s House of Lords case we say that that is an acknowledgement of allegiance.”

The Attorney General said that his team, led by Mr. Douglas Mendes SC and which includes Ms. Talibah Byron and Mr. Michael Quamina, is confident that they have put forward a very strong case “and that using the precedent of the House of Lords, which is for us like the Privy Council…there is a very strong belief in our case that we will be successful in this matter.”

Both sides have until January 25 to submit written submissions based on evidence that was presented in court today, after which the lawyers will have until February 4 to respond, if necessary, to those submissions before His Lordship makes a judgement.