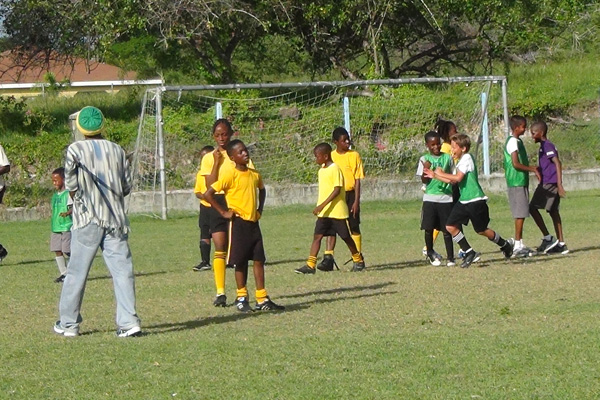 Lyn Jeffers on a roll

(Sports) Just one day after claiming a historic first victory in the Giant Malt sponsored Primary school league, the Lyn Jeffers Primary school came up with an astounding repeat performance versus the Elizabeth Pemberton Primary School.

The scenario was reminiscent of a David versus Goliath scenario:

For starters, throughout the 7 a side competition, the Lyn Jeffers school as per usual, showed up with only 6 players. Secondly, the EPPS team had a full support cast on the sidelines and in the stand but the Lyn Jeffers team had two staunch supporters in Patrick Newton and Delroy RAS IROY Pinney, both assisting more as Coaches but who both virtually screamed themselves hoarse as they shouted their instructions to the six determined players.

The first half of the contest proved uneventful except for a few missed chances on both sides of the field but as the second half commenced the Lyn Jeffers team appeared a lot more aggressive at the top and then it happened.

Tyler Hoffman got a break through at the top and released what looked like a regulation marble as the ball rolled slowly towards the goal keeper who bent down to collect and unbelievably, he ball rolled through his grasp and just over the line.

Urged on by Coach Adelvin Phillip, the EPPS team intensified their search for an equalizer but met stiff resistance from the Lyn Jeffers defence and was unable to penetrate.

Then young Hoffman got another break through at the top and with only the goal keeper to beat, this time produced and astonishing bomber which left the opposing goalie without a ghost of a chance.

Here is a summary of matches played on that day—Tuesday 12th November:

Game two—division A
EPPS and Maude Cross Prep held out to a nil-all draw in a very intense game. Interestingly, with seconds to go in the game, a right booter from Carlon Tuckett seemed to be sailing towards the goal, but instead hit one of the uprights and rebounded onto the field.

Game four—( a game continued from November 1st which was affected by rain)
CPS v IWPS—A division
Score: 1 goal to nil in favour of Ivor Walters Primary
The goal scorer was Ishawn Smithen

This leaves the league interestingly poised in both divisions as the winners cannot yet be identified as the point standings are so close with a few critical games remaining.

The current point standings are:

The division A clash between neighbours Charlestown Primary and Maude Cross prep has been billed as an especially crucial game for the A division teams. That game is scheduled for Friday 15th November.