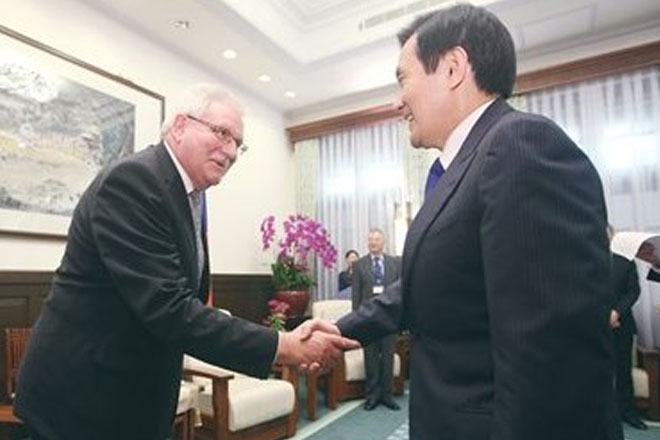 ROC President Ma Ying-Jeou said May 6 that Taiwan-EU ties are going from strength to strength, with further improvement expected across a spectrum of areas.

“Relations between the two sides are moving steadily ahead,” Ma said. “ROC citizens were granted Schengen visa-waiver treatment by the EU in 2011, and people-to-people exchanges have expanded apace ever since.”

The president made the remarks while receiving Werner Langen, chairman of the European Parliament-Taiwan Friendship Group, at the Presidential Office in Taipei City. Langen is leading a delegation of EP members on a six-day visit to Taiwan.

According to Ma, Taiwan and European countries share many universal values such as democracy, freedom and human rights. “These serve as a firm foundation for both sides to advance bilateral ties in areas of mutual benefit and interest,” he said.

Examples of such achievements include the signing of aviation and double taxation avoidance agreements with 14 and 13 European countries, respectively, as well as working holiday exchange programs with eight European countries.

Ma said this positive state of affairs is further illustrated by steadily rising two-way trade. Last year this number increased 3.7 percent to US$50.9 billion, with European firms the No. 1 source of foreign direct investment in Taiwan at US$33 billion.

The EP also passed a resolution in October 2013 urging the European Commission to begin talks with Taiwan on bilateral investment and economic cooperation agreements, the president said. “Such cooperation will help further strengthen economic and trade relations between the two sides.”

Taiwan is working to put all the liberalization and regulatory pieces in place for realization of these agreements, Ma said, adding that recent investment and trade pacts with Japan, New Zealand, Singapore and mainland China, as well as resuming negotiations with the U.S. under the Trade and Investment Framework Agreement, underscore the government’s seriousness in this regard.

On the cross-strait front, the president said the government’s policies are paying dividends in the form of greatly improved Taiwan-mainland China ties. “This outcome is supported by the international community and is helping Taiwan develop more stable relations with other countries.” (SFC-JSM)