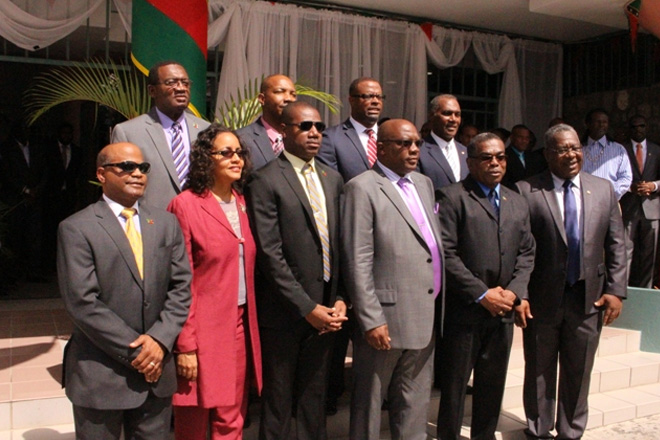 Basseterre, St. Kitts (SKNIS) — The St. Kitts and Nevis government of national unity is celebrating the achievement of several major policy initiatives in its first 100 days in office.

Having been sworn in on February 22, the current administration officially took up duties the next day making the 100 day mark today, June 2. Prime Minister Dr. the Honourable Timothy Harris noted that much had been done.

“We have delivered like no new government has in its first one hundred days,” he emphasized at a recent press conference. “Major promises kept. So major are they that they deserve repeating. The burdensome VAT [Value Added Tax] of 17% – removed completely from food, medicine and funeral expenses.”

This was enacted April 07 following an announcement by Prime Minister Harris on March 25. Residents relished the concept. “It’s an excellent idea because I’m going to save money,” said one gentleman. “I could afford to buy more or I can keep buying the same amount and still save money.”

The review of the First 100 days continued with reference to the EC$16 million grant which was secured from the Government of the Bolivarian Republic of Venezuela via the PetroCaribe Initiative on March 30.

“Sixteen million is available to pay former sugar workers disinherited from their due after years of hard work in the sugar industry,” Prime Minister Harris reviewed.

The Sugar Workers Restoration Fund (SWRF) Secretariat was launched May 18, in order to review and compensate former St. Kitts Sugar Manufacturing Corporation (SSMC) workers who had not received adequate severance packages. SWRF revealed that a sum of EC$28 million had initially been paid to workers in 2005 out a total gratuity pool of EC$44 million. Distribution of EC$16 million is expected to commence September 2015.

In addition to fostering closer ties with the Nevis Island Administration (NIA) which now has two representatives in the St. Kitts and Nevis Federal Cabinet compared to one previously, an initial sum of money has been provided for NIA.

“Ten million to the Nevis Island Administration as budgetary support with a commitment of its equitable due going forward. …,” Prime Minister Harris said.

Permanent Secretary in the Ministry of Finance (Nevis) Colin Dore said the funds will be dispersed across multiple sectors. The first project earmarked for funding is the upgrade of the Alexandra Hospital including the construction of a new laboratory. Funds have also been allocated to support the Nevis Water Supply Enhancement Project, the Hanley’s Road Rehabilitation Project in Gingerland, the Bath Stream (Hot Spring) Development Project, the Pinney’s Beach Recreation and Public Park Project and the Hot Meals Programme as well as the refurbishment of several public buildings including Government House.

The Sports sector was also included in the achievements in the First 100 Days.

“We rescued CARIFTA games,” Prime Minister Harris noted. “We rescued CPL. We honoured Kim Collins. We brought a new sense of civility to government and governance. …. It will only get better because we are consolidating the people’s government. We are truly working for the people.”

It had been revealed by Deputy Prime Minister and Minister responsible for Sports Honourable Shawn Richards at the first Prime Minister’s Press Conference held April 28, that the previous administration had not made budgetary allocations for the hosting of CARIFTA Games nor for contracted payments to host the Caribbean Premier League (CPL) cricket franchise. Yet CARIFTA games scheduled for the weekend of April 03came off successfully judging from the attendance of the event as well as the cheers and applause that complemented the renaming of the venue on April 05, to the Kim Collins Athletic Stadium at the same athletic meet.

At the Prime Minister’s Press Conference on May 27, Minister Richards updated on the CPL games scheduled to begin June 30. He said a revised payment schedule was made with CPL executives to allow the government time to meet financial obligations. Under the revised arrangement, the first installment of US $1 million was paid on May 22.

“We are on schedule with the payments,” Minister Richards stated. “There are two more payments equaling US$750,000 each to give a total of US $2.5 million which will be paid before the CPL games are hosted here.”

“We are encouraged by our success and we want to do more,” Dr. Harris noted. “To do more we need the right people at the right places and we need God on our side.”